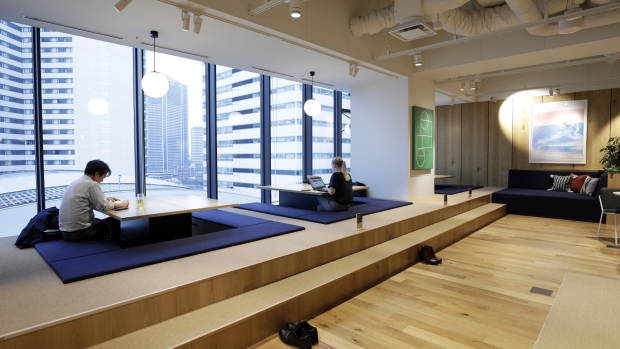 Members sit at low chabudai-style tables inside the WeWork Ocean Gate Minatomirai co-working office space, operated by The We Company, in Yokohama, Japan, on Friday, Oct. 11, 2019. WeWork formally withdrew the prospectus for an IPO this month, capping a botched fundraising effort that cost its top executive his job. The defeat places urgency on WeWork to find new sources of capital to keep its business running , Bloomberg

(Bloomberg) -- WeWork is in talks with lenders led by JPMorgan Chase & Co. about a $5 billion debt package, seeking to ease a cash crunch that could leave the office-sharing company short of money as soon as next month, according to people familiar with the matter.

“WeWork has retained a major Wall Street financial institution to arrange a financing,” a spokesperson for the company said in a statement on Sunday. “Approximately 60 financing sources have signed confidentiality agreements and are meeting with the company’s management and its bankers over the course of this past week and this coming week.”

Meanwhile, SoftBank Group Corp., the largest shareholder in WeWork, is currently in advanced talks to acquire more shares at a significantly lower valuation than the $47 billion WeWork had in January, said two people familiar with those discussions.