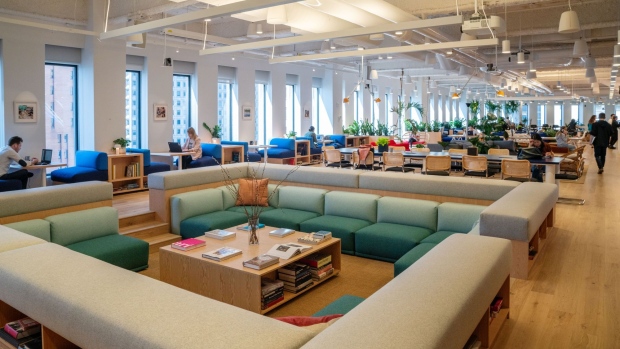 Seating areas are seen as members work at the WeWork Cos Inc. 85 Broad Street offices in the Manhattan borough of New York. , Bloomberg

(Bloomberg) -- WeWork Cos. cut prices across the U.S. in the past few months, indicating that a post-pandemic recovery will come slowly for office rentals.

The New York-based company reduced the price of most rental units—from individual desks to small offices—in early November and again in January, according to data compiled for Bloomberg by an independent researcher. The average price reduction overall was about 10%, the data show. Some locations declined by as much as 25%.

The pricing information was contained within the source code of WeWork’s website but wasn’t displayed to visitors through a web browser, said James Harring, who compiled and analyzed the data. Harring runs a large-scale data analysis consultancy called Audeff Research. A WeWork spokeswoman declined to comment.

Office rental prices across the country have been dropping precipitously. In the largest American cities, fewer than 20% of office workers were back at their desks as of the end of last year. Landlords’ asking prices could drop by 7% by early 2022 before rebounding, a forecast from CBRE Group Inc. shows. Separate research by real estate research firm Green Street found the hit could be hardest in markets such as San Francisco and New York.

By coincidence, WeWork started a significant push to cut costs before the coronavirus outbreak. After the company’s attempt to go public flamed out in 2019 and co-founder Adam Neumann was ousted as chief executive officer, WeWork’s new leadership sold off or shut down side businesses, including an elementary school. The company cut its cash burn and functional expenses by more than half from its peak in late 2019, the company has said. And the business got a bailout from its largest investor, SoftBank Group Corp.

Despite keeping locations largely open even during stay-at-home orders in many cities, WeWork reported shrinking quarterly revenue last year. Rivals have fared worse: Knotel filed for bankruptcy last month after its customers cancelled contracts, skipped payments and asked for rent reductions. WeWork’s CEO, Sandeep Mathrani, has said the company renegotiated many of its leases with landlords during the pandemic. He has pledged that WeWork will be profitable by the end of this year.

The recent price cuts at WeWork mostly ranged from 5% to 25%, said Harring, the analyst. The company slashed fees by 15% to 20% in Austin, Texas; Boston; Columbus, Ohio; Denver; New York City; and Washington. It was 24% in Chicago and 25% in Detroit, the data show.