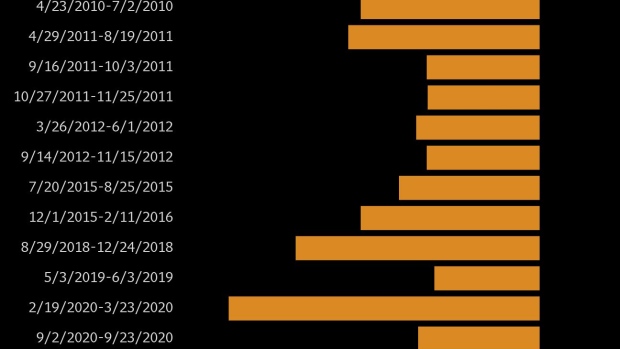 Monitors display stock market information at the Nasdaq MarketSite in New York, U.S., on Friday, Jan. 21, 2022. With the worst start of a year in more than a decade and a $2.2 trillion wipeout in market value, the Nasdaq Composite Index couldn’t have had a messier kickoff to 2022. , Bloomberg

(Bloomberg) -- When stocks plunged in 2018, Jerome Powell was there, buoying sentiment. Two years later as shares careened into the fastest bear market ever, he stepped up again, flooding the system with support.

After the Nasdaq 100’s worst week since March 2020, investors are wondering what it would take for the Federal Reserve chairman to reprise his unofficial role as market savior. But the bar is now clearly higher, with the economy running hot, consumer prices surging the most four decades and President Joe Biden saying it’s Powell’s job to tamp them down.

All that has landed on a market that’s doubled in three years, forcing a rethink of what it would take to trigger a Fed Put -- the amount of pain that would prompt the central bank to back down from its newfound hawkishness. The first clues could arrive next week, when the Fed is expected to signal it’s ready to raise rates to rein in the economy right after the Nasdaq 100 and its bloated valuations tumbled into a correction.

“The Fed may not be all that concerned about some air leaking” from stretched tech stock valuations, said Credit Suisse Group AG rates strategist Jonathan Cohn in a note. “A broader and more disruptive selloff would likely be needed to materially impact the direction of monetary policy.”

That policy is now decisively geared toward fighting inflation that reached 7% annually at the end of 2021. With the labor market showing signs of tightening, the Fed has signaled it intends to move swiftly to push price gains back toward its 2% target. Republicans and Democrats have expressed concern that the Fed has been over-stimulating the economy, and Biden’s comments that the central bank should target inflation suggest politicians can live with some market pain.

Recent history shows markets have buckled when the Fed turned hawkish. Take 2018, when Powell famously said that despite several rate increases, policy remained “a long way” from neutral. The stock market -- reacting to the threat to the economy -- convulsed, plunging nearly 20% in the next 12 weeks before Powell changed his tune. He repeated the delicate dance again in the middle of 2019.

A different kind of pivot came earlier this month, when minutes from the December meeting showed officials preparing to raise rates and reduce the balance sheet. The market’s reaction has been violent, culminating with a dizzying selloff in tech shares whose elevated valuations are no longer justifiable as borrowing costs rise.

The Fed doesn’t have a Congressional mandate to buoy stocks, but it’s become accepted wisdom over the past three decades that the central bank is generally responsive to market levels. The “put” was coined during Alan Greenspan’s tenure as chairman, when he moved decisively to arrest any violent market drops.

Julian Emanuel, strategist at Evercore ISI, noted that the Fed put has traditionally kicked in following a bear market, or a drop of at least 20% from records, rather than the 10% pullback commonly referred to as a “correction.” Based on that, the S&P 500 would need to drop another 12% from its Friday close of 4,397.94.

Any Fed reaction to the market might be different now than in 2018 and 2019, when inflation was stubbornly low and growth maddeningly slow. Fed tightening had markets reacting to the impact on an already shaky economy. Now, the Fed is running crisis-era policy in a time of roaring growth and excessive price gains, forcing a hawkish turn that isn’t as big of a threat to the economy.

The Fed’s policy stance has shifted toward “focusing on how well they could contain the upward pressure on inflation,” Tomo Kinoshita, a global market strategist at Invesco Asset Management in Tokyo, said in an interview. “It’s less about what’s happening to share prices.”

Expectations have grown that the central bank will lift borrowing costs earlier and at a faster pace. That has spurred a swift rise in bond yields, which has pushed investors to rotate out of high-flying growth stocks and opt instead for shares of energy, financials and other cyclical corners of the market that stand to benefit from higher rates.

The yield on the 10-year U.S. Treasury briefly topped 1.87% earlier this week, the highest since January 2020.