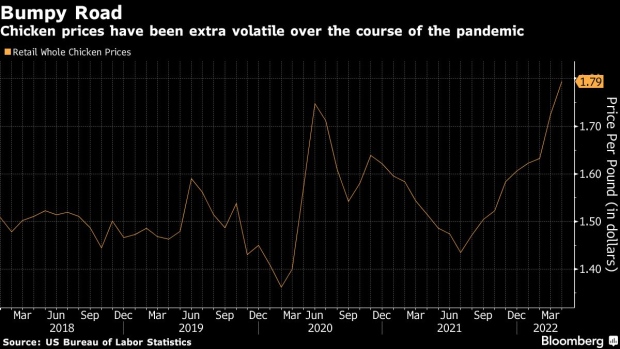 (Bloomberg) -- Chicken-wing chain Wingstop Inc. is in active discussions for the potential purchase of a poultry company -- a bid to better control the volatile cost of chicken.

Wingstop still has as much as $150 million in proceeds from its bond sale earlier this year, which could be used to fund any transaction, according to Chief Executive Officer Michael Skipworth, who took the helm in March. He said the company hired outside experts to evaluate integrating a chicken farm into the company’s supply chain -- or building its own, an option that would take longer to bring online.

“We took our leverage up and left a little bit of dry powder on our balance sheet,” Skipworth said in an interview. “We think that’s enough to advance this strategy,” he said, adding the company is in “active dialog with a short list.”

Companies are under growing pressure to manage accelerating inflation and ensure adequate supply of essential inputs. Supply chains already strained by the pandemic and a longstanding labor shortage are being roiled anew as prices surge for fuel and certain foods due to the Russian invasion of Ukraine. Wingstop buys its wings, which make up more than half of its commodity purchases, on the spot market, which represents a risk if prices surge.

“It’s a homerun for them. They’re ahead of where they thought they would be. Their costs are coming in better,” he said of Costco’s farm. “That really opened our eyes. There’s an opportunity here.”

The company isn’t just looking at acquisitions. Partnering with another restaurant to lock in supplies of entire birds, or investing in a farm without full ownership are other possibilities, Skipworth said.

Less-volatile chicken expenses would mean that more franchisees would want to own and operate Wingstop restaurants, he said. Currently the company owns only a small fraction of its roughly 1,800 locations. Longer-term, there’s opportunity for as many as 4,000 domestic Wingstop restaurants, Skipworth said, with more locations overseas.

Wingstop’s shares were little changed at 10:14 a.m. in New York. Through Monday’s close, the stock has tumbled 54% this year, more than double the decline for the Nasdaq Composite Index over the same period.

Dallas-based Wingstop doesn’t plan to get rid of external chicken suppliers entirely -- in fact, its own facility would supply only about 20% of the company’s overall wing purchases. But it would help balance the company’s risks, Skipworth said.