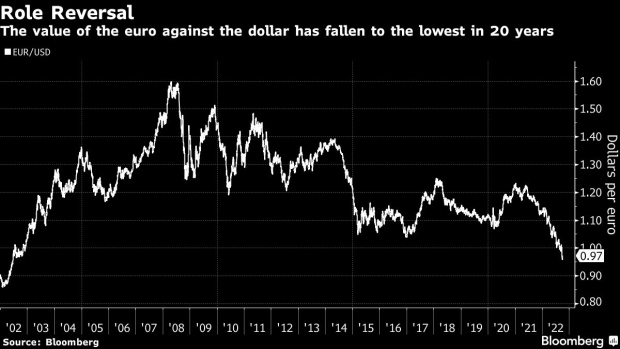 (Bloomberg) -- Italian engineering company Cimolai SpA has hired advisers at Lazard Ltd. to help it restructure derivatives that have soured in recent months amid steep losses for the euro.

Privately-owned Cimolai appointed the US investment bank, specialized in advising troubled companies, to assist on an overhaul of its liabilities linked to derivatives, according to people familiar with the matter, who asked not to be named because the details are private.

A representative for Cimolai declined to comment on the appointment. A spokesperson for Lazard wasn’t available to comment.

The company was particularly exposed to derivatives tied to the euro-dollar rate called “targeted accrual redemption forwards,” or TARFs, according to its latest available financial accounts. The bets went south as the euro slid against the dollar, with the common currency eventually hitting parity for the first time in about two decades. The euro is now weaker than the U.S. dollar.

The company used the derivatives to reduce its currency risk on its overseas projects, including a 60,000-seater stadium built for this year’s FIFA World Cup in Qatar, the new Las Vegas Raiders stadium and the Perelman Performing Arts Center in New York. The group had $70 million of outstanding TARFs as of the end of 2020, and at least $230 million in 2019, according to the latest available data.

Cimolai designs and builds steel structures for bridges, buildings, arenas and even a weapons storage facility. The firm had €233 million ($227 million) of loans at the end of 2020 with Italian banks including Intesa Sanpaolo SpA and UniCredit SpA, according to its accounts. It recorded €421 million of revenues in 2021, it said on its website.

TARFs are a relatively cheap way for investors to protect themselves against currency moves but also carry exposure to possible losses. The products were at the center of a scandal that saw Deutsche Bank AG’s probe the activities of bankers selling derivatives to corporate clients in Southern Europe, particularly Spain.

(Updates with revenues in sixth paragraph)