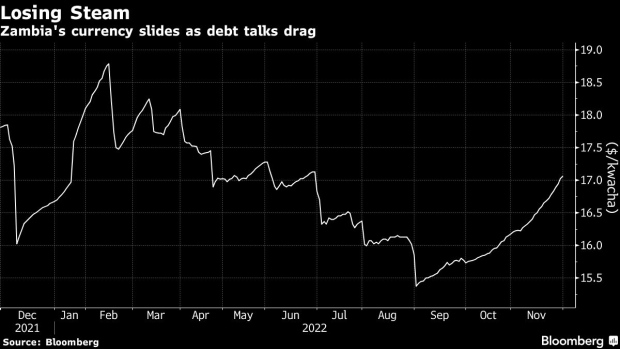 (Bloomberg) -- The depth of the haircuts Zambia is asking creditors to accept is proving an obstacle in debt restructuring talks, according to the central bank governor of Africa’s first pandemic-era sovereign defaulter.

The southern African nation needs $8.4 billion in debt relief to stay on track with its International Monetary Fund program that ends in 2025, the Washington-based lender’s analysis shows. That translates into a 49% reduction in the present value of the debt the government is seeking to restructure.

Zambia’s request could involve debt write-offs that would be especially painful for Chinese creditors, which hold about a third of the government’s external liabilities.

“The sticking point is obviously the quantum of the relief,” Denny Kalyalya said in an interview on the sidelines of the African Finance Industry Summit in Lome, Togo’s capital, referring to the $8.4 billion discount. “The other creditors are saying that it’s too stiff. The IMF is saying no, this is consistent with the program.”

Kalyalya didn’t specify which creditors he was referring too.

Zambia is using the Group of 20’s Common Framework mechanism that seeks to help poor nations to restructure excessive debt. It brings together the traditional bilateral creditors through the Paris Club, and China, which isn’t part of that group, but has become by far the biggest lender to developing countries. Progress has been slow since Zambia defaulted more than two years ago.

Only two other nations have applied for their obligations to be restructured using the framework: Ethiopia and Chad. While a civil war blocked progress for the Horn of Africa nation, it took Chad so long to negotiate with creditors that by the time they struck a deal, relief was no longer needed.

Zambia is targeting implementing deals with official bilateral creditors and commercial lenders including the holders of its $3 billion in eurobonds in the first quarter of next year. The government has missed previous targets as official creditors took longer than expected to form a negotiating committee.

“We have found that this is a very complicated, delicate process,” said Kalyalya, with delays affecting budget planning, investor confidence and weighing on the foreign-exchange market. “The deadlines have come and gone. That’s where we are getting the frustration. We should by now have concluded.”

--With assistance from Matthew Hill and Taonga Clifford Mitimingi.