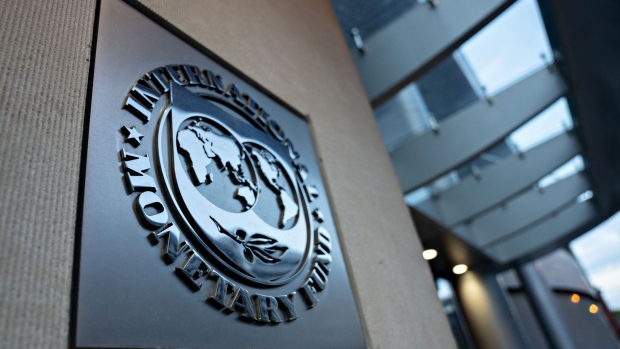 Signage hangs at the International Monetary Fund (IMF) headquarters in Washington, D.C., U.S., on Tuesday, April 14, 2020. In its first World Economic Outlook report since the spread of the coronavirus and subsequent freezing of major economies, the IMF estimated today that global gross domestic product will shrink 3% this year. Photographer: Andrew Harrer/Bloomberg , Bloomberg

Zambia reached a staff-level agreement with the International Monetary Fund over a bailout that will pave the way for negotiations with creditors to restructure about $16 billion in external debt. Zambia’s dollar debt rallied.

The deal for about $1.4 billion in funding must still be approved by the Washington-based lender’s executive board but it’s a big step forward for the nation that became Africa’s first pandemic-era sovereign defaulter a year ago. The IMF and Zambia’s finance ministry confirmed the agreement over a so-called Extended Credit Facility on Friday.

Zambia first signaled plans to approach the IMF for assistance in 2014, followed by years of on-again, off-again talks. A program is now crucial for the government to press ahead with creditor negotiations under the Group of 20’s so-called Common Framework for debt restructuring.

“This agreement is based on the authorities’ plans to undertake bold and ambitious economic reforms,” Allison Holland, the IMF’s mission chief for Zambia, said in an emailed statement.

Zambia, the continent’s second-biggest copper producer, borrowed heavily for a decade to finance an ambitious infrastructure program as well as to pay for energy and farm subsidies. Government debt was at 129% of gross domestic product in 2020, according to the IMF.

Hakainde Hichilema, who was elected in August, has vowed to bring the state’s finances under control, with IMF board approval for the loan in the first quarter of 2022 seen as key to those plans.

The government will then begin negotiating with external creditors in the second quarter, according to Finance Minister Situmbeko Musokotwane. Lazard Freres SAS and White & Case LLP are advising Zambia on the restructuring.

“The staff-level agreement paves the way for debt restructuring talks with our creditors,” Musokotwane said in a statement. “Having a program in place will boost investor confidence and move our economy towards a sustainable economic growth trajectory.”

Zambia will seek final IMF board approval once it has an understanding with its creditors, Musokotwane said.

Key obstacles to winning IMF support in recent years included a lack of transparency regarding borrowing, as well as the government selling fuel and power to consumers at prices lower than cost.

There is room for more efficient state agricultural support, and wealthier people tend to be the biggest beneficiaries of fuel and electricity subsidies, Holland, said in a webcast Nov. 10.

Zambia in October published a full list of its 44 external creditors that showed the central government owes Chinese lenders more than one-third of its total $13.4 billion of foreign-currency debt. The long and diverse list of creditors, which also includes holders of its $3 billion in Eurobonds, shows how complex Zambia’s planned debt restructuring talks are likely to be.