Is There a Bubble in Passive Investing?

Michael Burry said he amassed a “significant” bearish wager that’s performing well as riskier assets tumble and warned of an exodus from passive investments as the coronavirus pandemic batters the global economy.

The California-based money manager, who shot to fame after betting against mortgage securities before the 2008 financial crisis, said recent market turmoil may burst the “bubble” in passive investing that he’s been warning about since August. Burry said central bank stimulus, which underpinned an 11-year bull market in large-cap stocks, can’t do much to help during a pandemic.

“I have had a significant bearish market bet that is working out for now,” Burry said in an email interview, without providing further details on the trade except to say it was a trade of a “good size” against indexes. “A global pandemic is absolutely a potential trigger for the unwinding of the passive investing bubble. With COVID-19, the hysteria appears to me worse than the reality, but after the stampede, it won’t matter whether what started it justified it.”

Burry made waves last year with his controversial views on passive investments, saying the flood of money into index funds was distorting prices for stocks and bonds in much the same way that purchases of collateralized debt obligations did for subprime mortgages before the crisis. While markets and fund inflows stayed buoyant for months after Burry’s comments, some passive products have recently suffered withdrawals after the virus outbreak sparked a sell-off in global shares and corporate bonds.

In one sign of how central bank stimulus has struggled to put a floor under markets, the MSCI All-Country World Index plunged more than 20 per cent from its February peak on Thursday. That came despite a raft of economic support measures from major economies this week that included an emergency rate cut from the Bank of England, and a pledge by the Federal Reserve to inject more than US$5 trillion into the financial system if needed. 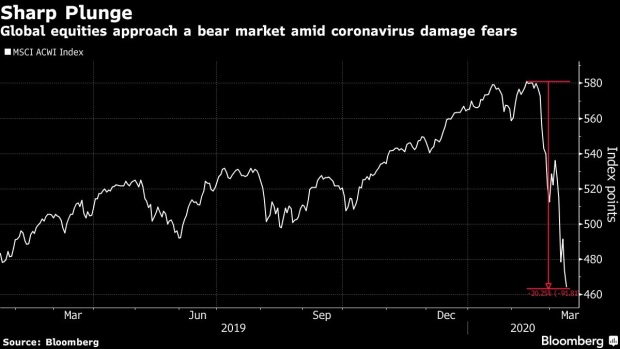 “No one knows how long it will last, and so people have a valid reason to sell,” said Burry, whose wager against mortgage securities was chronicled by Michael Lewis in “The Big Short: Inside the Doomsday Machine.” “If you are in stocks because they have been going up and because the central banks always could apply the brakes to any sell-off, well, the those pre-conditions are not currently valid.”

Other prominent money managers including Carl Icahn have expressed similar concerns about the passive investment boom, yet skeptics of Burry’s thesis abound.

The online forum of the Bogleheads, a group inspired by the late Vanguard Group founder Jack Bogle, lit up this week with those proclaiming the market drop as an opportunity to boost their holdings in passive investments. Eric Balchunas, senior exchange-traded fund analyst at Bloomberg Intelligence, said in a March 3 report that passive index mutual funds and ETFs tracking equities had only about US$20 billion in estimated outflows in the final week of February, less than 1 per cent of the US$4 trillion in lost market value. Active managers seeking to meet redemptions likely played a bigger role, he said.

Even amid the volatility, Burry said he hasn’t yet noticed any signs of dysfunction in the markets that would make it harder to trade or exploit investment opportunities. He’s focused on identifying small-cap stocks that have been unduly punished in the rout, saying that the virus shock will eventually fade and that this month’s collapse in oil prices has helped some businesses and consumers. He said “at some point” he will close out his bearish bet and shift the money into stocks.

For now, though, he sees little sign that markets have reached a point of maximum pain.

“I would say despite the viciousness of the sell-off, there has not been enough time for the buy-the-dip mentality to truly go away,” Burry said. “But the fear in the markets is being paralleled by growing fear of the virus, and the twofer is toxic to market sentiment.”