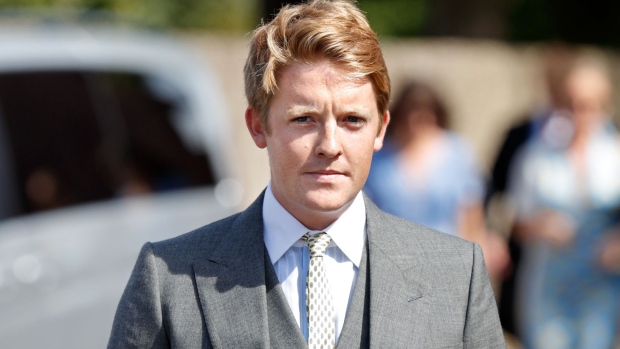 Hugh Grosvenor, the seventh Duke of Westminster, is the U.K.’s third-richest person and considered by some its most eligible bachelor.

He’s tried to stay out of the spotlight since inheriting his title in 2016, but these days it’s almost impossible for a billionaire, especially one with a global property empire, to remain in the background.

Criticism is mounting for the Duke and his Grosvenor Group Ltd. The firm faces opposition to its plans to demolish a London tower that houses some of the city’s poorest residents, attracting negative headlines as rising inequality becomes an increasingly hot topic. Labour Party leader Jeremy Corbyn in October blasted the 28-year-old as a “dodgy landlord,” part of a broad-based attack on U.K. billionaires and the “rigged system.”

This leaves the Grosvenor Group in an unenviable position with this week’s election.

If the Conservative Party under Boris Johnson wins the Dec. 12 vote -- the most likely scenario based on polls -- then Brexit will follow, potentially devaluing London property.

But if Labour can form a government, the family’s fortune may face an existential threat. Corbyn is campaigning on higher taxes for the wealthy, restrictions on landlords and has also suggested public registers for the type of trusts that discreetly manage the wealth of the Grosvenor family and other dynastic clans.

A Labour government “would require far more transparency of wealth, particularly with trusts,” said Richard Murphy, professor of international political economy at City University of London. The Duke “didn’t choose to be what he is, as it’s an accident of birth, but he is a personification of a form of property ownership whose time has now passed.”

A spokesman for the Duke of Westminster declined to comment.

The Grosvenors have faced starker challenges than a firebrand Labour government, surviving through wars and political shifts.

They trace their lineage back almost 1,000 years to a relative of William the Conqueror, who invaded England from Normandy in 1066. Their initial wealth was accumulated through mines and minerals, but they owe their modern fortune to a 17th century marriage. Sir Thomas Grosvenor received 500 acres of swamp and orchard to the west of the City of London as a dowry from the parents of his 12-year-old bride.

Mayfair and Belgravia are now hotspots for some of London’s most well-heeled tenants, including luxury retailers, art galleries and hedge funds.

Grosvenor Group has expanded to 60 cities worldwide and managed assets totaling 12.3 billion pounds (US$15.9 billion) at the end of last year. But the company’s core is still London.

Hugh became the head of his family’s estate when his father Gerald died from a heart attack at 64. According to the will, the sixth Duke of Westminster left 616 million pounds after debts and liabilities, with 20,000 pounds for each of his three daughters, who may receive additional income through the Grosvenor family trusts.

Gerald’s guns, fishing equipment and cars passed to Hugh, who also received his title. U.K. laws effectively limit that part of inheritance to males. That gave Hugh a personal fortune now estimated at $11.8 billion, according to the Bloomberg Billionaires Index.

Hugh had a very different upbringing than his father, who attended Harrow School and the Royal Military Academy Sandhurst. Gerald loved fast cars, women and champagne at breakfast, according to “The Reluctant Billionaire,” a 2018 book by Tom Quinn.

The current duke was educated at Ellesmere College, a private school near the Welsh border, and graduated from the University of Newcastle six years ago with a degree in Countryside Management.

Hugh then joined the Grosvenor Estate’s graduate program, working in each segment of his family’s holdings, which also includes rural estates in the U.K. and Spain. Today, as Duke, Hugh is a trustee of the Grosvenor Estate. Grosvenor Group’s CEO Mark Preston has ultimate responsibility though for the fortune of Britain’s richest landlord.

At the heart of it all is Grosvenor Square, a leafy public space in London bordered by embassies, celebrity-chef restaurants and hotel suites costing more than $5,000 a night. This month, silk roses dot the square, adding a festive touch to the center of Mayfair.

That attention to detail hasn’t gone unnoticed by local residents.

Grosvenor Estate “looks after and upgrades the public realm,” said Camilla Dell, founder of Black Brick Property Solutions, which buys real estate on behalf of the wealthy. “Pedestrian streets are widened, and they’ve been very conscious the shops are quality and different from one another.”

But these improvements have helped push up prices so much that the areas are now synonymous with the international elite. One four-bedroom apartment in Grosvenor Square is on the market for 17 million pounds, and a nearby terraced house is offered at 65 million pounds.

Home prices in this region are the highest in London. The same areas also have the city’s starkest income inequality, according to anti-poverty group Trust for London.

The Grosvenor Estate’s philanthropic arm aims to tackle some of the harshest effects of inequality across its holdings by supporting charities that target homelessness. It also provides office space in London for non-profits, including the Childhood Trust, which focuses on poverty.

But tensions are building, especially where Grosvenor Group interacts with the less affluent.

Tenants housed by the local council in one tower set for demolition are furious at the prospect of being uprooted when the building’s lease expires in 2023. Supported by local Labour politicians, the residents have campaigned against the plans and more than 200,000 people have signed a petition supporting their cause.

It was a similar story when Grosvenor Group last year proposed building about 1,300 units in Bermondsey, southeast London, aimed at workers without the means to buy a home and too much income to qualify for social housing. The area’s Labour-run council rejected the plans in February, criticizing Grosvenor Group for being “off the mark” in numbers of affordable homes.

The firm has filed a fresh application to London’s governing body, which has the power to overrule local authorities and is expected to hold a public hearing on the matter by the end of the year.

But even if these latest plans go through, the spotlight will remain on the Duke of Westminster and his empire.

“With these huge fortunes, power has become extraordinary concentrated in the U.K. and goes virtually unchallenged,” said John Christensen, chair of Tax Justice Network, an advocacy group that pushes for financial transparency. “That has created a country of two parts with a tiny, very wealthy and powerful elite and the rest who are struggling and by and large all the tax provisions are geared to taxing those who are not elite. It’s a massive distortion.”