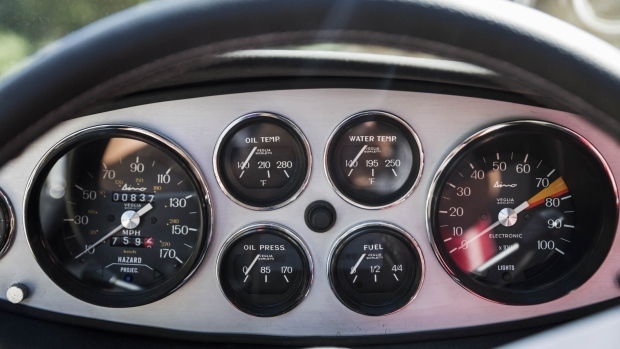 Lee changed the leather seats from their original color to a blazing Ferrari red. , Emily Berl/Bloomberg/Bloomberg

David Lee, owner of the US$300 million watch and investment empire Hing Wa Lee Jewelers, also owns more than US$50 million worth of the world’s rarest cars.

His collection, stored in a garage underneath a nondescript shopping plaza 40 minutes outside downtown Los Angeles, includes models from Rolls-Royce, Pagani, Porsche, and Mercedes-Benz. But it is his dozens of iconic Ferraris—including an Enzo, an F50, and F40, as well as multiple F12s, 250s, 275s, and 288s—that have earned Lee the most notoriety.

“When I was 29, I bought a Diablo VT, but it was always in the shop,” Lee tells me during an interview in Los Angeles. “I didn’t get to enjoy the car, so I bought a Ferrari 355 Spyder. Since then, I have focused on collecting Ferraris. I just had a love for them.”

An unassuming 51-year-old married father of two, Lee frequents the world’s most prestigious car shows, hosts big-spender dinners for Chopard in Geneva, jets to Asia and the Middle East to visit clients, and drives with Koenigsegg-owning friends.

He can have whatever car he wants.

But that gets pretty boring after a while. “I thought when I get certain cars, I would be the most happy. And I was, for a few years,” Lee says. “But I started to get tired of it. With hyper-cars, if you have money and you present yourself well to the ownership, you can buy a car. A lot of people have them.” He began thinking whether he could do something grander, something that would make history. Something that would be only for him. “I wanted to own something that is not what money can buy.”

So the Ferrari fanatic with 724,000 Instagram followers committed the cardinal sin for blue-chip collectibles: He modified one.

Traditionally, collectors of high-end cars have gone—sometimes literally—to the ends of the Earth to protect the exact specifications of the original specimen. Most car shows and historic rally races are built around the idea that the cars must remain uncompromised by modern alterations or additions, even down to retaining the original bolts. It’s how collectors protect the value of their investment, after all: The cars have to be able to be identified as authentic.

But a year ago, Lee bought a black 1972 Dino for US$260,000 and then spent more than US$1 million to update it—or “outlaw” it, as the practice is called among connoisseurs—with modern components and bespoke styling cues. It took him more than 3,000 hours over a year to perfect with Moto Technique, a body shop based in Surrey, England. He calls it a Monza 3.6 Evo.

Even parked by a wall of blazing bougainvillea in California, the car looks understated. But it’s undeniably arresting: The open-top roadster looks slightly more modern than the original, with flared fenders, new rims, covered headlights, and a see-through engine cover made from carbon fiber.

Lee also replaced the original V6 with a new, 3.6-liter V8 and added a new transmission, brakes, and—yes—even a removable holder for his iPhone. The seats were redone in blazing oxblood leather; the shifter got a new, steel knob.

“I felt like it was OK to put the investment in this, because there are enough people who can accept it,” Lee says. “They are not all purists, and that is a change. That is a huge change.”

Ferrari first rolled out the Dino in the late 1960s and early 1970s as an attempt to offer a low-cost sports car. But the original version has long been snubbed by Ferrari adherents for its relatively high production numbers, small engine, and anemic 192 horsepower. It was so ostracized that Ferrari originally decided not even to formally badge it, calling it solely “Dino,” without the official Ferrari logo of approval.

That said, Lee is hardly the first to outlaw a special car. Singer perfected the business side of it years ago when it started restoring Porsche 911s to the tune of US$600,000 and up, taking cues from prolific private individuals who “outlawed” classic cars for years before. In fact, it was one such friend’s invite to join his heavily altered 1971 Porsche 911 on a run up California’s Highway 2 that jumpstarted Lee into modifying his own: “I realized I didn’t have anything from that era that could keep up,” Lee said.

His modified Dino is not super-fast, but it is quicker and drives more precisely than the original. It sits so low to the ground that it’s easy to simply step over the door to get inside; the steering and braking are eased by semi-automatic power systems. The hardtop roof, when taken off, fits snugly behind the two cockpit-style seats.

Ferrari hasn’t seen the vehicle, officially. The brand has some history with Lee, who claims he was denied the chance to buy an LaFerrari Aperta because he wasn’t a preferred customer.

A request for comment from Ferrari returned an emailed statement saying that, while Ferrari brass aren’t aware of the specifics of Lee’s Dino, “It is worth noting the importance of authenticity in the classic car market. The Ferrari Classiche certification process that ensures this, The Ferrari Certificate of Authenticity, protects the priceless heritage of an historic car, and generally increases sale value, while giving access to the most prestigious official events organized by Ferrari.”

Not that Lee seems to care. He frames it as if he is righting a long-held wrong. “With the Dino, there was always the question of: What if this car was more powerful? What if it looked like it did—beautiful—but had more power?”

The V8 engine in Lee’s Dino now produces 400 horsepower, compared to the 192hp that Ferrari boasted in the original version. And auctions experts such as Hagerty’s Jonathan Klinger have argued that the Dino has more investment potential than, say, the sexy and popular Ferrari 308.

Lee plans to show it on the lawn at the Quail this August, prior to the Pebble Beach Concours d’Elegance—where, incidentally, it would not be welcome.

Of course, that’s kind of the point.

“People are trained by the traditions and the car culture of the concourses,” Lee says. “The concourses are judging your car to say it is acceptable if it’s done this way—and anything far from that, you’re somehow lesser. You haven’t made the grade; you didn’t get the A on the report card. But you can have the cleanest and best Ferrari, or the latest and greatest supercars, and nobody is going to feel anything special.”

Lee believes that his Dino is so special that others will want one, too. “All these Saudi guys and guys from Europe and Asia are saying, ‘David, I want one! This is a great idea.’” He plans to make and sell 25 more at the rate of five per year. Order-taking will start this summer.