Canada has succumbed to investor panic as concerns about the economic and financial impact of the coronavirus escalated.

The Bank of Canada slashed interest rates by half a percentage point on Wednesday -- easing monetary policy for the first time in almost five years -- as it followed the Federal Reserve in trying to protect its economy from the outbreak.

The moves did little to stem fears. Canadian government bond yields joined their U.S. counterparts, plummeting to record lows Friday while questions swirled about liquidity in the world’s biggest debt market. The loonie continued to weaken to its lowest level since June and the nation’s stock market plunged Friday, erasing this week’s gain.

“Today is even worse than yesterday to trade bonds, the degree of mental preoccupation has obviously risen,” said Nicholas Leach, a portfolio manager at CIBC Asset Management, the $134 billion (US$100 billion) investing arm of Canadian Imperial Bank of Commerce. “I have 8-10 per cent cash, the most I have ever had as a high-yield manager, but I’m still not ready to buy on the dip. If there are no redemptions, this is dry powder, but I’m worried about outflows in the environment.”

Canada’s 10-year government bond yield dipped to a record low of 0.628 per cent, according to data compiled by Bloomberg which goes back to 1989. The previous record was 0.908 per cent on Feb. 11 2016. The S&P/TSX Composite Index has dropped 9.9 per cent since its February peak, putting it 32 out of 94 global benchmark indexes.

Spreads in the corporate bond market increased to their widest since September, as fears intensify that viral outbreak that has infected more than 100,000 people and killed over 3,400 will hurt corporate income and some companies’ ability to repay debt.

“We don’t think this is a time you want to be layering risk into your portfolio,” said Martin Pelletier, a portfolio manager at TriVest Wealth Counsel in Calgary. “This could mean using some of that excess cash or trimming a portion of the gains from rallying government bonds to pick away at broader equity positions.”

After an exhausting week, here’s a look at what strategists are saying.

David Rosenberg, chief economist and strategist at Rosenberg Research and Associates, says the U.S. Federal Reserve’s surprise move to cut interest rates by 50 basis points was “necessary” and it may not be done cutting amid the rapid spread of COVID-19.

“Today feels like a massive fear trade and investors are capitulating based on emotion,” said Mark Carpani, who manages $1.2 billion as head of fixed income at Toronto-based Ridgewood Capital Asset Management. “These moves provide an opportunity to seek out value while fading the fear trade.”

“Yesterday’s move in the rates market was extreme, followed by an even larger move overnight. The book “Extraordinary Popular Delusions and the Madness of Crowds” comes to mind.”

David Rosenberg, who has long forecast a recession, said investors are in “a complete bog of uncertainty.”

“This is black swan event,” said Rosenberg, the former Merrill Lynch chief economist who now runs his own firm Rosenberg Research and Associates. “There is so much we still don’t know about this virus and the full global effect on the economy, earnings and what it means for debt-servicing capacity as cash flows recede. Let alone the human impact.”

Joey Mack, director of fixed income at RF Securities Clearing, joins BNN Bloomberg to weigh in on how the bond market is reacting to the Bank of Canada's decision to slash its benchmark interest rate.

“It’s not as bad as 2008-2009 when you weren’t sure your counterparty was going to have the cash to deliver your sales,” said Joey Mack, head of trading and fixed income at RF Securities Clearing, a unit of GMP Capital Inc. “What’s happened here, I’ve never seen the Canada market be this illiquid.”

Pelletier agrees. “I don’t think this is a 2008 event as this isn’t a liquidity crisis and central banks will ensure the orderly flow of capital and money within markets,” he said. “I think if more thought of it this way then perhaps they would be acting differently with their portfolios.”

“Our clients are not hitting the panic button but they are looking for guidance. Despite the sharp daily moves in the equity markets, valuations are not yet back to long term averages nor are they at levels, where we would be advocating buying this dip,” said Kevin Headland, senior investment strategist at Manulife Investments in Toronto.

“Should this environment result in a recession, then there is likely more downside to come, and clients should prepare their portfolios for that risk,” he said.

Geof Marshall, chief of credit at Toronto-based CI Investments, said he’s seen some inbound inquiries from clients. “I don’t think it is the retail investor panicking. And this feels like what market pukes feel like: trying to make informed decisions with imperfect information.”

If you were drowning in a sea of global news, here’s a look at some of the other Canadian events that took place this week. 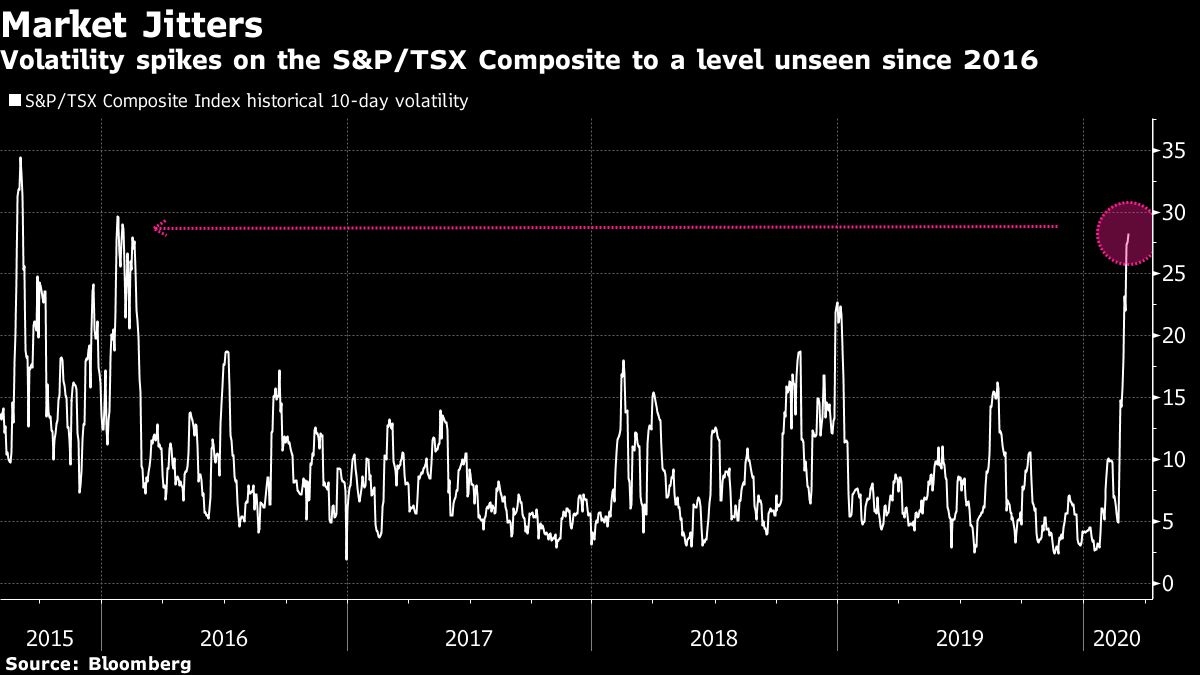 Governor Stephen Poloz defended the central bank from the criticism its most aggressive move in more than a decade may fuel already dangerously high household debt levels, while doing little to solve the underlying problems associated with the spread of the virus. He also left the door open to further rate cuts.

In economic data that came through this week, Canada’s job market strengthened for a third-straight month, a reassuring sign within the domestic economy even as deathly viral outbreak threatens future growth.

Prime Minister Justin Trudeau’s government is also working to reassure the country that the governments has tools to shield the economy from the global outbreak.

Finance Minister Bill Morneau said the government plans to increase the amount it sets aside for emergencies in its next budget, due in coming weeks. He said he has been in regular contact with the CEOs of major banks and telcos to discuss the virus impact. Trudeau promised that his government will protect Canada’s economy from a possible slowdown.