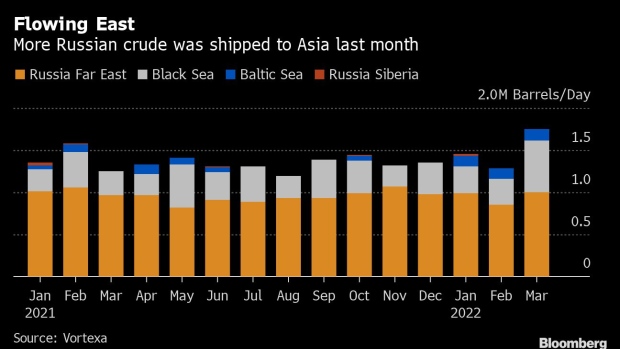 Pipework at a gas pre-treatment unit at the Gazprom PJSC Chayandinskoye oil, gas and condensate field, a resource base for the Power of Siberia gas pipeline, in the Lensk district of the Sakha Republic, Russia, on Tuesday, Oct. 12, 2021. European natural gas futures declined after Russia signaled that it may offer additional volumes soon. Photographer: Andrey Rudakov/Bloomberg , Bloomberg

(Bloomberg) -- Cargoes of Russian Sokol crude from the Far East have sold out for next month in a sign that shipments from the pariah nation continue to find buyers despite Moscow facing more sanctions for its war in Ukraine.

May-loading cargoes from the Sakhalin-I project will be delivered to buyers in Japan, South Korea, China and India on a spot or term basis, said traders who asked not to be named because the information is private. Sokol yields a lot of diesel, and it can be shipped to nations in north Asia within a week.

Russian oil is still finding its way to willing buyers that either can’t resist the temptation of cheaper crude, or are struggling to find replacement barrels as many others seek alternatives to the OPEC+ producer’s supplies. The U.S. and its allies are planning a massive release of strategic reserves to soften the economic fallout of Russia’s war in Ukraine, which is in its second month.

Trafigura Group, which Rosneft supplies with Sokol, sold cargoes to destinations including China’s Shandong province, home to many of the nation’s private refiners, traders said. Exxon will use its share of Sokol in its own refineries, they added. A total of ten cargoes were slated for May-loading, according to a program.

Traders said there have been offers to supply Russian ESPO crude, another grade that loads from the Far East, on a delivered basis to Shandong. Some sellers have even began accepting yuan to tempt more buyers who may be deterred by payment issues including the issuance of letters of credit.

Russia’s flagship Urals crude, which is shipped from ports in the Baltic and Black Seas, has also been making its way to India and China. That’s led to the Biden administration warning India about aligning itself with Russia.