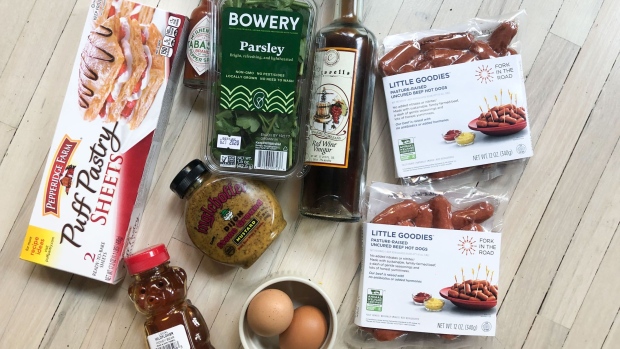 Spare a moment for all the foods that have disappeared during the pandemic—and not because there’s been a run on supermarkets. Not many people are mobilizing to dunk bread cubes in a communal pot of cheese fondue. Likewise, bowls of onion dip with piles of chips aren’t around as they once were. Instead of buckets of chicken wings on game night, we’ve got fried chicken popcorn on movie night.

Pigs in a blanket are equally absent. The cherished cocktail party staple has dropped off the radar because there are no cocktail parties to cherish them at. Any events that are still happening are likely virtual, without benefit of a server with a silver tray laden with pastry-wrapped mini dogs.

It’s time for that to change, says chef Alex Guarnaschelli, who has long recognized the power of pigs in blankets. The erstwhile star of Chopped and the new Supermarket Stakeout is also a notable French-trained cook who helms Butter Midtown in New York.

“I love the texture. I love dumping them in too much mustard,” she says. “Puff pastry meets a hot dog is basically me, a New Yorker who went to cook in France.”

“People talk about the perfect bank job, this is perfect snack,” she says, regardingthe ease with which they are consumed. At parties, there’s no need for cocktail forks, and no messy leftover bones or seafood shells. “I have rolled up to events with pigs in blankets, and the woman in the fanciest silk dress will eat 10 of them.”

In her brand-new Cook with Me: 150 Recipes for the Home Cook  (Penguin Random House; $35), Guarnaschelli offers a slew of enhanced comfort foods, including the addictive snack. She roasts pork chops on a sheet pan, with spicy Brussels sprouts, and makes spaghetti and meatballs two ways. (“Are you a Godfather or a Goodfellas person?” she asks. The Godfather  sauce has red wine, and the meatballs include sausage.)

“Most chefs find it hard to come off their high horse when they’re cooking at home,” she says. “When I had my daughter Ava, I gave myself permission to be a home cook.”

That means knowing there’s no dishwasher to clean up dozens of prep bowls, or scoops of caviar to garnish a dish that doesn’t look great.

Guarnaschelli used to buy the heat-and-serve pigs in a blanket for her family. Then she decided they weren’t good value for the result and started making them herself. At first, she tried to make her version fancier, with tweaks such as condiments spread on the pastry. Quickly, the chef realized, the original was almost perfect but could benefit from a minor tweak or two. Namely, she tucks chopped parsley into the ‘blanket’ and adds tabasco and grainy mustard to the sauce.

The result is a pig in a blanket, with a refreshing herb accent and a fiery dipping sauce with the pop of mustard seeds, that’s featured in her new book. “Parsley is a little hint of freshly mowed-lawn vibe—so good with the meat,” observes Gurnaschelli.

Here’s the other thing I realized about pigs in a blanket when I made them—they are one of the very few foods that are as fun to make as they are to eat. It’s hard not be delighted by rolling up a mini hot dog in a strip of pastry and then seeing it puff up and brown in the oven. The bite is pure joy: a crisp, juicy pop of meat barely contained in its flaky crust.

The following recipe is adapted from Cook with Me, by Alex Guarnaschelli.

Herbed Pigs in a Blanket, With Spicy Mustard Sauce

Using a paring knife, make a few small cuts in each hot dog to prevent them bursting when they bake. In a small bowl, whisk the egg yolks with a splash of cold water. Line two sheet pans with parchment paper.

On a lightly floured work surface, spread out one puff pastry sheet. Lightly flatten the seams, and smooth the edges with a rolling pin or wine bottle. Cut the pastry into strips about 1¼ inches wide and 2¼ inches long (about 24 strips per puff pastry sheet, so you have 48 in total), and arrange on the lined sheet pans.

Sprinkle chopped parsley down the center of each pastry strip. Set a hot dog crosswise on the short end of a pastry strip. Dab some of the egg wash on the other end of the pastry strip, roll the hot dog up in its dough “blanket,” and press the edge to seal; the dough should overlap slightly. Arrange the pigs in blankets, seam-side down, on the prepared sheet pans, leaving a little space between them for browning. Refrigerate the pigs in blankets for at least 30 minutes or up to 4 hours.

Preheat the oven to 375°F. Bake the pigs in blankets for about 30 minutes, until golden brown.

Meanwhile, in a small bowl, whisk the mustard, honey, Tabasco, and vinegar. Add a little splash of water if it’s too thick. Taste for seasoning and adjust as you like. Serve alongside the hot pigs in blankets.