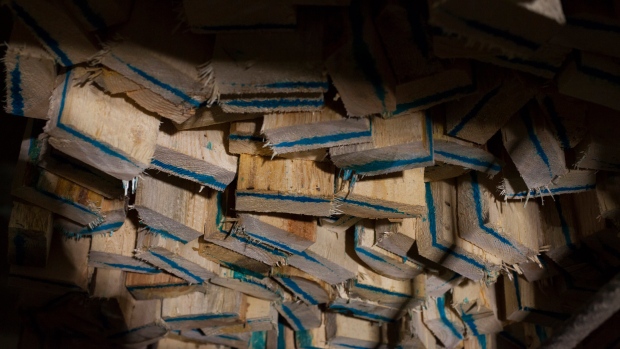 Boards are marked blue for very high moisture content after being sorted at the West Fraser Timber Co. sawmill in Quesnel, British Columbia, Canada, on Friday, June 5, 2015. The grain-of-rice-sized mountain pine beetle attacked and killed more than 700 million cubic meters of pine trees in the inland forests of B.C. prompting greater investment in U.S. facilities by some Canadian companies. , Bloomberg

Brookfield announced after markets closed Tuesday it had sold the stake for $128 million or $17 per share.

Since then, the shares have dropped by more than three per cent from Tuesday's close of $17 to $16.41 by the end of trading Thursday.

Vancouver-based Acadian announced that because of the sale, Benjamin Vaughan of Brookfield would step down as chairman and be replaced by Malcolm Cockwell, a Macer principal and managing director at Haliburton Forest who has been on the board since May 2018.

RBC Capital Markets analyst Paul Quinn says in a report the shakeup removes a known business entity in Brookfield but might be welcomed by investors hoping for “sleepy” Acadian to more actively expand beyond its core timberland operations in New Brunswick and Maine.

In a statement, Cockwell says Macer was attracted to Acadian by its proven success and will support its current strategy and operations plan.