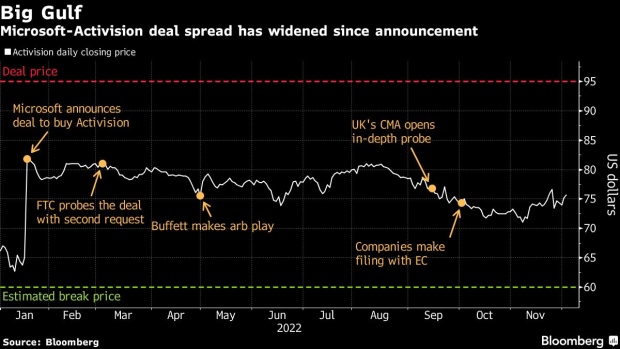 (Bloomberg) -- For analysts following Activision Blizzard Inc., it’s almost as if the video-game company never decided to sell itself to Microsoft Corp. for $69 billion.

As investors increasingly doubt whether the deal will survive antitrust scrutiny, Wall Street brokerages have been growing more bullish on Activision’s standalone prospects. Their average 12-month price target for the stock is $92.17, almost identical to their $91.95 prediction on Jan. 17, the day before Microsoft shocked the market with the takeover announcement.

Should Microsoft’s $95-a-share cash offer fail, arbitragers tend to see the stock dropping back toward $60, where it traded before the bid, said Aaron Glick, a merger-arb specialist at Cowen & Co., from $75.76 Friday. Yet it might not stay there long: Analysts have been raising earnings estimates the past month, citing the outlook for its Call of Duty and World of Warcraft franchises. And the stock would jump more than 20% if the deal does go through.

“You can see why people would see this as a favorable risk/reward, with or without a deal,” said Ralph Rocco, portfolio manager at Gabelli Funds, which owns Activision shares. “We see limited fundamental downside and a decent amount of upside if the deal goes through.”

Since the January deal announcement, Activision’s stock has weakened from the low $80s to the mid $70s. The transaction faces in-depth antitrust probes in the European Union and UK, as well as heightened scrutiny from the Federal Trade Commission in the US, which Politico reported is likely to file a lawsuit to block the sale.

Microsoft is ready to fight if the US sues to block the deal, Bloomberg News reported late Friday, citing a person familiar with the matter said. Microsoft, which has said it expects to close the transaction by June 30, declined to comment on the prospect of an FTC suit. Separately, The New York Post reported that there is a rift within the FTC over the deal that could help get it approved.

There’s not much of a takeover premium left: Over the five years before the acquisition, investors valued Activision at an average of 23 times estimated earnings, though that multiple had weakened to 16.8 right before Microsoft stepped in. Activision shares are priced now at 20 times earnings.

The market is pricing in roughly a 35% to 40% probability of the deal closing. “If it falls apart, some event-driven traders will have to reduce or exit their positions and that selling pressure could push the stock down below investors’ fair value estimates,” said Cowen’s Glick. There’s a difference “between fair value and where something trades due to technical dislocation,” he added.

At least six analysts upgraded the stock in November, including Wells Fargo Securities, which  wrote that the market “is undervaluing ATVI relative to both outcomes (deal or no deal).” Analyst Brian Fitzgerald cited Activision’s portfolio of intellectual property, PC player base, and growth opportunity in mobile gaming.

The view was echoed by Truist Securities, which wrote that based on a strong release slate, Activision “should have a big 2023.”

Recent gains in the Nasdaq 100 Index have led to a growing number of components trading above their 200-day moving average, a sign that the recent rally is picking up momentum. As of Friday’s close, about 55% of stocks in the benchmark are above this closely watched level, near the highest since January. To compare, fewer than 8% of components were above their 200-day at the end of September. The overall index needs to rise about 4.5% to reach its 200-day, which it hasn’t closed above since April.