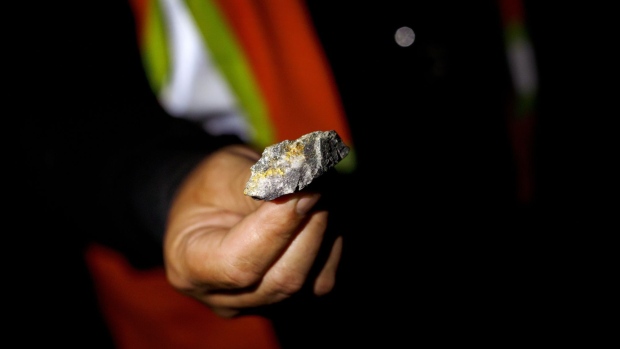 A worker displays a rock with gold at the Agnico Eagle Mines Ltd. Meliadine site in Rankin Inlet, Nunavut, Canada, on Thursday, Aug. 1, 2019. The loss of snow and ice are causing Canada to heat up much faster than the rest of the world—more than twice the global rate of warming, according to a national scientific assessment published in April. The Canadian Arctic is one of the fastest-warming places, heating up at about three times the global average. Photographer: Cole Burston/Bloomberg , Bloomberg

Agnico will pay C$2.20 per share in cash, the Toronto-based company and TMAC said Tuesday in a joint statement. The offer is 40% more than TMAC’s closing price on Monday, and higher than the C$1.75 proposed by China’s Shandong Gold Mining Co. in May.

Agnico didn’t feel pressure to pay a premium for TMAC and basically took over the Shandong purchase arrangement that was already agreed to by TMAC shareholders, Chief Executive Officer Sean Boyd said.

“But conditions have changed since that last deal was approved,” Boyd said Tuesday by phone. “Certainly the climate for gold has improved, the mine is generating cash now -- it wasn’t earlier this year.”

TMAC owns the Hope Bay gold mine in the northern territory of Nunavut, an operation that includes a port and airstrips. Agnico already has two working mines in the Canadian Arctic: Meliadine and Meadowbank.

Last month, Prime Minister Justin Trudeau’s government rejected the Shandong acquisition, which had been the subject of a security review under the Investment Canada Act. The Chinese company said at the time the government’s decision was made “for the purpose of safeguarding national security.”