Shares of Agnico Eagle Mines Ltd. and Kirkland Lake Gold Ltd. fell after the two Canadian miners announced a “merger of equals” that offered investors a lower deal premium than other gold combinations.

The $13.4 billion (US$10.6 billion) transaction creates one of the world’s biggest bullion producers and follows other large takeovers in recent years that reshaped the industry. Agnico’s combination with Kirkland creates a miner with assets in Canada, Australia, Finland and Mexico and an expected production of 3.4 million ounces of gold this year, elevating its ranking among the world’s senior gold producers.

Investors will get 0.7935 of an Agnico share for each Kirkland share, which the companies said represents a 1 per cent premium over Kirkland’s 10-day average share price on the Toronto Stock Exchange, according to Tuesday’s joint statement. Stock moves after the deal was announced have since turned that premium into a discount. Agnico Chief Executive Officer Sean Boyd said in a television interview with BNN Bloomberg that he didn’t want to pay a premium to do a deal.

“We’ve seen in the industry where big premiums have actually destroyed value,” Boyd said. “This has been about unlocking value and that was the basis that we were able to see common ground and get this announced.”

Agnico shares fell 0.8 per cent to $63.03 at 4:05 p.m. trading in Toronto, while Kirkland Lake dropped 7.4 per cent to $51.38 in its biggest decline since November, putting the offer at a 2.7 per cent discount to Kirkland’s current stock price. 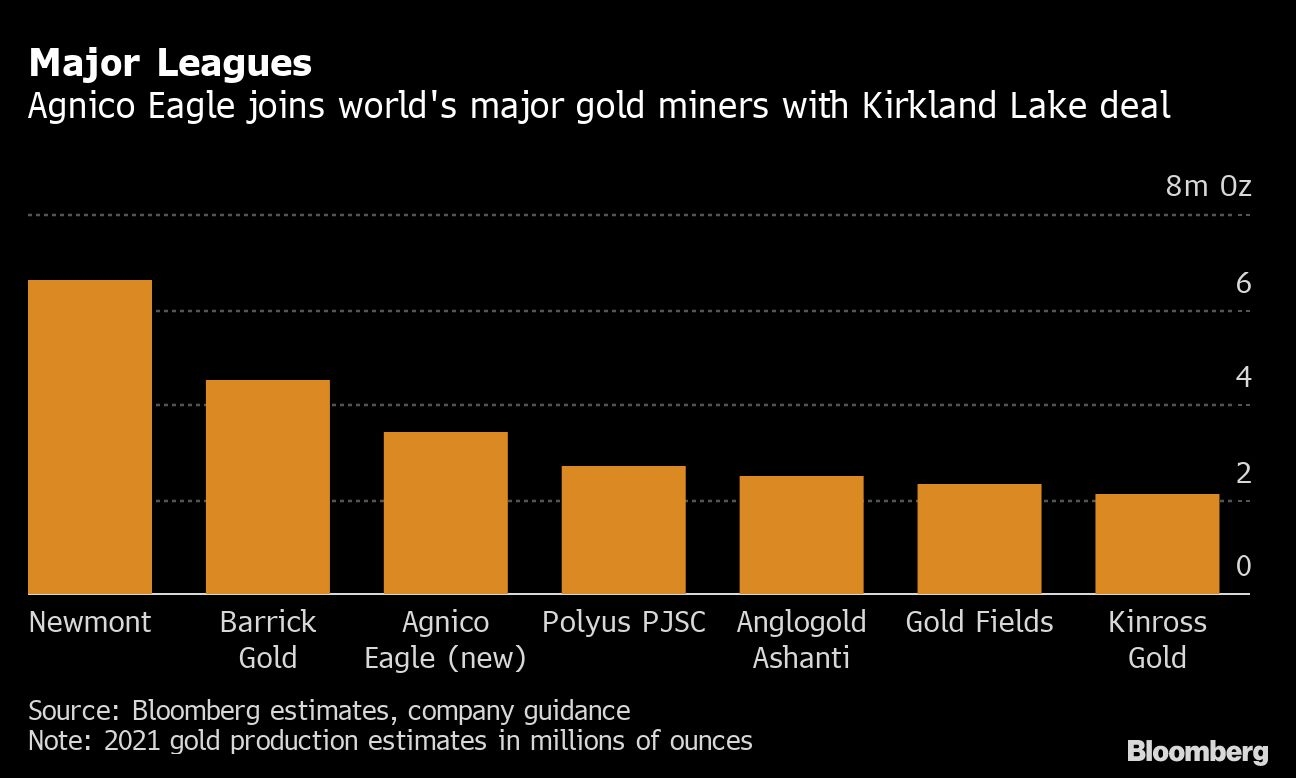 Barrick Gold Corp.’s 2018 takeover of Randgold Resources set the tone of offering low or no premium paid by the buyer, while mergers of medium or smaller sized gold companies have historically fetched higher premiums. Still, Newmont Corp.’s takeover of Goldcorp Inc. in 2019 generated about a 17 per cent premium, while Kirkland Lake’s purchase of Detour Gold Corp. later that year came in with about a 24 per cent premium.

“In a merger of equals, the premium will come over time, over the next year or two as the market sees them creating synergy and executing their plan, doing the various things they do to create value,” said Joe Foster, a portfolio manager at New York-based fund manager Van Eck Associates, Kirkland’s biggest shareholder. “That will play out over the next couple of years, and that’s where you get the premium -- you’re not going to see it today.”

The extra an acquiring company would pay above the target’s stock price used to be 25 per cent to 30 per cent higher about a decade ago when takeovers in the gold industry were “much more vibrant,” Douglas Groh, a senior portfolio manager at Sprott Asset Management USA, said in an interview.

“Really, in the last four or five years, it’s been mergers of equals,” Groh said. “That’s probably a little bit of a disappointment for people that are in the space, thinking that all I’m getting is a merger of equals.”

The merged miner will use Agnico’s name and have a board and management team drawing from both companies. Tony Makuch, currently Kirkland’s CEO, will take the top job once the deal is completed, while Boyd will become executive chair.

Agnico had been shied away from large deals in the past, but this deal is “more about a number of mines and location of mines in terms of manageability, rather than an overall ounce number,” Boyd said.  It’s also about the exploration potential where the merged company will be able to grow deposits and lifelong assets in “good parts of the world where you can actually do business.”