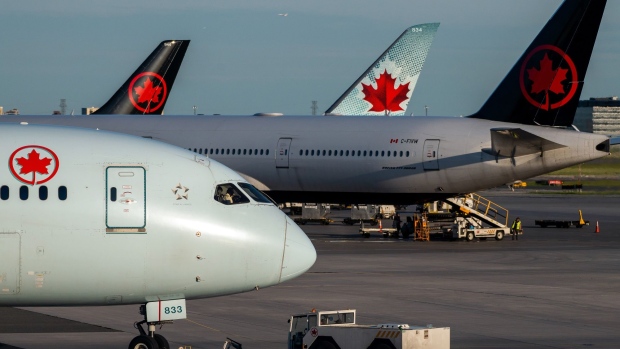 Air Canada planes on the tarmac at Toronto Pearson International Airport (YYZ) in Mississauga, Ontario, Canada, on Thursday, June 2, 2022. Air Canada is Canada's largest domestic and international airline, and a popular choice to bring travelers to its neighbor, the United States. , Bloomberg

(Bloomberg) -- Air Canada reported results below estimates in the second quarter, a period in which the global aviation industry could not meet passenger demand.

Operating revenue was nearly five times the same quarter as 2021, when Covid-related travel restrictions were still in place, at C$3.98 billion ($3.1 billion), but short of the C$4.02 billion expected by Bloomberg’s consensus estimates. The company also recorded a C$1.60 net loss per share, about double what analysts predicted.

“Despite meticulous planning and projecting, participants involved in the air transport system are facing significant pressure in restarting,” said Michael Rousseau, President and Chief Executive Officer of Air Canada. “We acknowledge the inconveniences and disruptions some of our customers have faced, and we deeply regret this. This is not business as usual.”

Canada’s largest airline had to cut dozens of daily flights amid labor shortages and wider airport disruptions. For the quarter, Air Canada still managed to increase its available seat miles, a measure of airlines’ capacity, about five times from the same period in 2021. That was in line with projections made in April. Capacity was still 73% of levels in the second quarter of 2019.

Air Canada hopes to regain 74% of its 2019 available seat miles capacity this year.

In late June, the airline had to cancel about 154, or 8%, of its scheduled flights per day in July and August.

As of last Friday, Air Canada had slightly underperformed its peers since the start of the year with a negative return of -17.66%.