Air Canada is trying to take its frequent-flyer program back to the future.

The airline is teaming up with Visa Inc. and two Canadian banks on a $250 million cash offer for Aimia Inc.’s Aeroplan rewards program. If accepted -- and Aimia surged the most on record on the news -- the deal would return the loyalty plan to Air Canada, which spun it off in 2005.

Aimia said in a statement it will consider the proposal, which came after private talks between the Montreal-based company and its potential buyers. Aimia’s board formed a special committee "some time ago" and had engaged legal and financial advisers in connections with the talks.

The surprise bid marks a shift in strategy for Canada’s biggest airline, which had announced plans last year to cut ties with Aeroplan and begin its own rewards program in 2020. Taking control of Aimia’s system would enable Aeroplan members to transfer their points to Air Canada’s program, eliminating the risk for the carrier that frequent flyers would stick with the old plan over the new one.

The transaction “would effectively eliminate a competitor in the loyalty space,” said Cam Doerksen, an analyst at National Bank Financial. “We are frankly somewhat surprised by this proposal as Air Canada had shown little interest in acquiring Aeroplan from Aimia previously.’’ 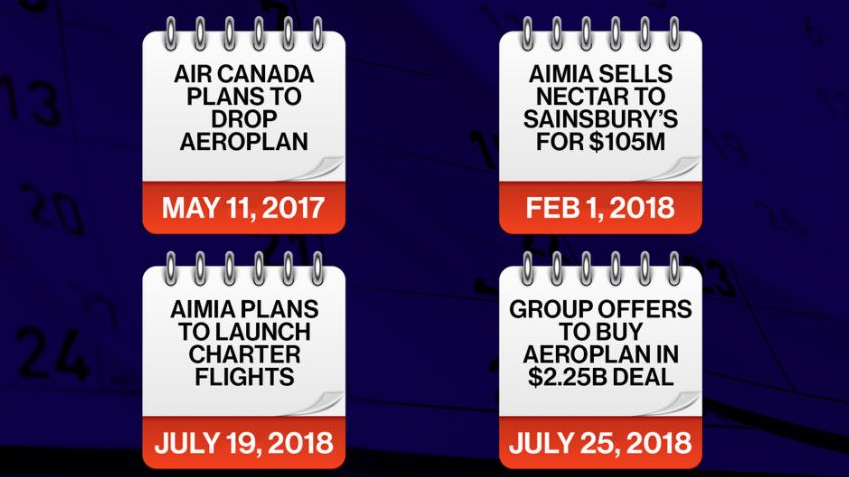 Air Canada’s bidding group, which also includes Toronto-Dominion Bank and Canadian Imperial Bank of Commerce as well as Visa’s Canada unit, said in a statement it would also assume the liability of about $2 billion in Aeroplan points. The offer implies an estimated market value of $3.64 per Aimia share, a 46 per cent premium to its closing price of $2.50 Tuesday, the bidders said.

A representative for Aimia wasn’t immediately available for comment. The size of the bid means shareholders will probably be asked to vote on the deal, Martin Landry, an analyst at GMP Securities, said in a note to clients.

“We believe they will be tempted to accept Air Canada’s offer despite the sour taste it may leave with some shareholders” after Air Canada’s decision in May 2017 not to renew its contract with Aeroplan last year, he said. “There is a limited pool of potential acquirers.”

Air Canada is seeking to satisfy customers who expressed a preference for their Aeroplan miles to be transferred to the new loyalty program, Ben Smith, who runs the carrier’s passenger airline unit, said Wednesday in a message to customers. The Montreal-based airline polled more than 30,000 customers about the new rewards plan, he said.

“This is what this proposed deal allows us to do -- if successful, all Aeroplan miles would transfer into the new Air Canada loyalty program in 2020,” Smith said in an email to customers.

The group has requested Aimia respond to its proposal by Aug. 2. It said the proposed transaction, valued at about $2.25 billion, is subject to due diligence and the customary conditions. Aimia had a market value of about $380 million at the close Tuesday.

Aeroplan, which was launched in 1984, was once the in-house loyalty program of Air Canada before it was spun off as a wholly-owned subsidiary. Following Air Canada’s bankruptcy restructuring, its parent company, ACE Aviation Holdings, spun off Aeroplan Income Fund in an initial public offering in 2005, raising $250 million. It was rebranded as Aimia in 2011.

Beyond the 2020 target Air Canada has set to start its own rewards program, Aimia faces another key date in 2024. That’s when credit-card contracts with Toronto-Dominion and Canadian Imperial are due to expire.

Aimia said in May it had appointed Jeremy Rabe as its new chief executive officer. Rabe, the founding CEO of Premier Loyalty & Marketing, was nominated as a director by activist investor Mittleman Brothers and was added to the board on April 27.

Last week, Aimia said members would be able to use their points on any major airline beginning July 2020. The Aeroplan program will introduce a points-transfer program with Kaligo Solutions allowing members to convert miles into close to 20 frequent flyer programs “covering all major airline alliances, along with numerous hotel loyalty programs,” Aimia said.

Aeroplan was once part of Canada’s most popular credit card, CIBC’s Aerogold Visa. The two-decade partnership ended in 2013 when Toronto-Dominion took over as the primary financial partner, though CIBC can still offer Aeroplan cards under a 10-year deal.

Air Canada, meanwhile, has been seeking a credit-card partner as it prepares its own frequent-flyer program. Chief Financial Officer Michael Rousseau told analysts in April the company would probably make a decision by the end of 2018. The carrier is looking to capture more benefits from a program that Air Canada expects to have a net present value of at least $2 billion over 15 years.

With a file from BNN Bloomberg