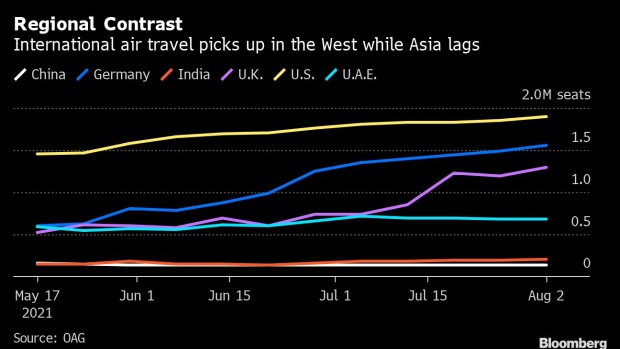 (Bloomberg) -- After 18 months of gloom over prospects for long-distance flights, airlines are finally striking a more optimistic tone about some of the world’s most lucrative travel markets.

The partial reopening of key routes across the North Atlantic and vital transfer hubs in the Middle East is stirring predictions that inter-continental journeys are on their way back from the devastating slump caused by the coronavirus pandemic.

Deutsche Lufthansa AG was the latest to predict a pickup alongside the loosening of Covid-19 curbs and a mounting vaccine take-up. The German flag carrier said Thursday that North America could open from late summer, with Asia following at the end of the year. On a conference call following second-quarter results, Chief Executive Officer Carsten Spohr said he’s encouraged by high levels of interest where travel is allowed.

“While we are waiting for the transatlantic to reopen for Europeans, the U.S. point of sale shows very high demand, leading the recovery of our long-haul business,” Spohr said. He cited visible acceleration in routes to Africa and Central and South America, as well as progress fighting the pandemic in Asia. “Our bilateral talks with governments are going well -- even India is going well.”

In a positive development for long-distance travel, the U.K. on Wednesday announced a further easing of its border curbs. India, the United Arab Emirates and Qatar moved to medium-risk status from high risk, meaning arrivals will no longer require a hotel quarantine.

India, with deep ties to the U.K., is a major driver for international flights, while the Gulf territories are home to major carriers including Dubai’s Emirates, the world’s biggest long-haul airline prior to the coronavirus outbreak.

Emirates said interest in travel picked up overnight, while rival Qatar Airways said it expects a surge of bookings over coming days.

Air France-KLM Chief Financial Officer Steven Zaat said last week that ticket sales had been “fantastic” in the second quarter, while load factors are running at 60% on North Atlantic routes after the European Union opened to American visitors. The group is adding more long-haul routes over the winter, including services from Paris to Tanzania, Sri Lanka and Oman.

While airlines agree that trends are headed in the right direction, the pace of the recovery remains unclear. In contrast to Lufthansa and Air France-KLM, British Airways owner IAG SA is keeping a lid on capacity, while Rolls-Royce Holdings Plc, whose engines power long-haul planes, said Friday a cash flow goal for 2022 may be delayed as flying hours fail to rebound fast enough.

“The exact rate and timing of return is out of our control,” Rolls-Royce CEO Warren East said on a media call. “We know the underlying demand is there, and it’s just a question of when governments are going to put in place the schemes to protect populations but also allow for international travel.”

The biggest challenge has been the rise of new Covid variants along with a cacophony of changing rules as governments try to stop their spread. This has confused passengers, disrupting journeys at times or leaving them fighting for refunds on canceled trips. The uncertainty has made it difficult for airlines and travelers alike to count on positive developments being sustained.

China, for example, has imposed new restrictions in a bid to slow a delta-driven outbreak that’s grown to more than 500 cases scattered across half the country. There, as in many Asian nations, the government has stuck to an aggressive containment playbook.

Nevertheless, there is some evidence that governments are starting to coalesce around the common principle of allowing people who have been fully inoculated to enter.

The European Union has made rapid travel gains over summer with its vaccine passport system combined with accelerating shots. France is readying to extend the requirement to all airline travel and high-speed train trips, after Air France-KLM said last week that transatlantic trade has picked up, with load factors around 60%.

Hong Kong said this week it will allow in vaccinated tourists from all but 10 places in the world from Monday, significantly easing of some of the tightest border curbs anywhere. Visitors from medium-risk nations including the U.S. will be able to enter for the first time since the start of the pandemic -- albeit with a stay in a quarantine hotel -- while Hong Kong residents from places like the U.K. and India can return home.

Just as the virus has become part of everyday life, the challenge will be “learning to live with it with international travel as well,” U.K. Transport Secretary Grant Shapps told BBC radio, adding that full vaccination will most likely become a requirement to enter countries in future.

Even the U.S., which has banned most European visitors since last year, when the virus spread across the region in its first wave, appears to be more open to easing restrictions, French Transport Minister Jean-Baptiste Djebbari said on France Info radio.

Reuters reported earlier that the administration of President Joe Biden is preparing to move to a system based on allowing in vaccinated foreigners, to eventually replace the country bans started by Donald Trump.

“A U.S. scientific committee is blocking this but it seems that a path is opening,” Djebbari said. “This is a happy development and we will continue to work with our U.S. counterparts so it becomes a palpable reality.”

Growing optimism about a long-haul revival comes with shorter flights already on the road to recovery following the earlier easing of domestic and regional travel curbs.

Ryanair Holdings Plc, Europe’s biggest low-cost airline, said in July it will pump more seats into the market as bookings pick up, while rival Wizz Air Holdings Plc aims to return capacity to pre-Covid levels this month, becoming one of the first major operators to do so.