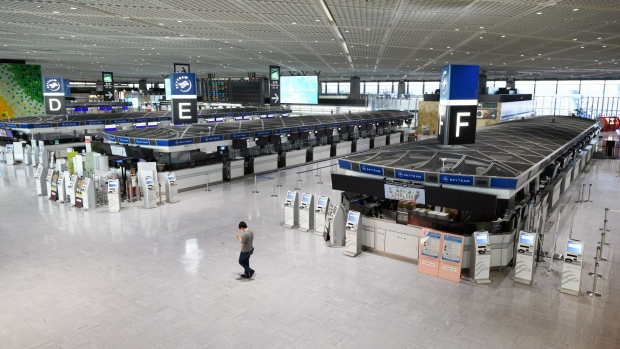 A man walks through a near-empty departures hall of Narita Airport in Narita, Chiba Prefecture, Japan, on July 19. , Bloomberg

The airline industry pushed back its hopes of a rebound in traffic levels to pre-pandemic levels amid disappointing passenger numbers since lockdowns lifted.

A full recovery is unlikely before 2024, a year later than it recently predicted, the International Air Transport Association said on a call Tuesday. Traffic is not growing as fast as airlines are adding capacity, the industry’s main trade group added.

“The demand and the revenues are not rising as quickly as expected so airlines are still burning cash,” IATA chief economist Brian Pearce said. “The situation is deterioriating relative to what we had expected.”

Airlines have been battered by the restrictions brought in to contain the coronavirus. Carriers had been pinning their hopes on catching the tail-end of the profitable summer season but disruptions continue amid viral flare-ups in countries like France and Spain.

The restart of travel could be the most difficult time for airlines as they begin to incur higher costs when there are insufficient passenger numbers to generate profit. The majority of airlines likely won’t return to positive cash flow until 2021, Pearce said.

Business travel is not yet recovering in line with a rebound in industry confidence, said Pearce, suggesting that behaviors have changed. There will likely be less corporate travel to company offices in the future, he said, with consequences for business models which often depend on high-paying executive fliers to cover the shortfall on economy tickets.

Although the level of traffic showed an improvement in June from prior months, it was still 86.5 per cent down from a year earlier.

The leisure travel market is not likely to recover until consumer confidence is restored, according to the airline lobby group. The U.K.’s decision to reintroduce quarantine for passengers returning from Spain is “very significant,” said Pearce.

A renewed increase in cases has been seen in countries including Hong Kong, Germany and Spain. IATA chief Alexandre de Juniac said he favors virus tests as a means of easing restrictions.