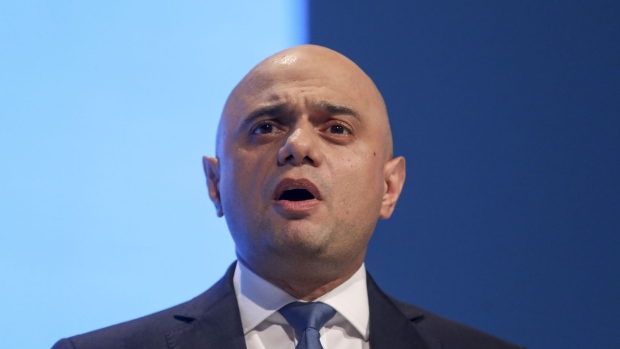 Sajid Javid, U.K. chancellor of the exchequer, delivers his keynote speech on the day two of the annual Conservative Party conference at Manchester Central in Manchester, U.K., on Monday, Sept. 30, 2019. U.K. Prime Minister Boris Johnson hoped to use his party's annual convention to launch his campaign to win the next British general election. , Bloomberg

In a letter to Javid, chief executives of British Airways, Ryanair and other carriers asked for a clear protocol for managing future outbreaks “without recourse to knee-jerk universal testing or hotel quarantine.” They also called on the U.K. to rule out border closures and flight bans in response to future variants of concern.

“Living with Covid means getting back to normality, being vigilant against variants and keeping the red list in our back pocket, but removing across-the-board restrictions in the same way we have done for hospitality and the domestic economy,” said Tim Alderslade, chief executive at Airlines UK. The U.K. saw a 71% slump in 2021 international departures compared to 2019, the trade body for British registered airlines said.

Airlines UK also demanded the end of testing for fully vaccinated passengers, amid reports that Javid may scrap the requirement for a negative rapid test by day two of arrival in the U.K. as soon as this week.

The government is easing the so-called Plan B restrictions put in place after the omicron variant began to spread in December, eventually pushing daily cases to a record earlier this month. The surge has eased in recent weeks, prompting the government to announce it would drop the need for vaccine certificates to enter larger venues, do away with most mask mandates and urge workers to return to the office.