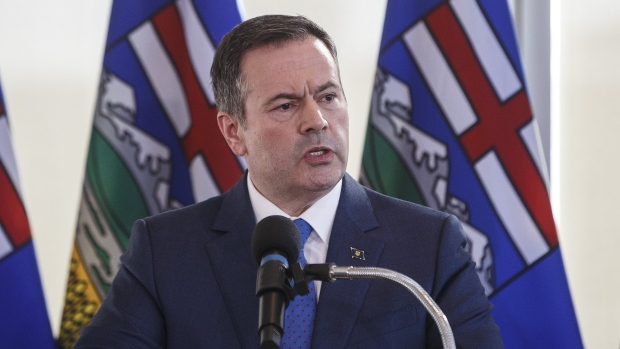 He said there was nothing in the Trudeau government's plan for the ailing energy industry that has suffered thousands of job losses.

"Yesterday's throne speech included 6,783 words," Kenney said Thursday during a media teleconference. "Not one of them was about the largest industry sector in the Canadian economy. Not one of them mentioned our oil and gas sector, which helped to pull Canada through the last global recession.

"Not one word recognizing the crisis in that sector and in energy-producing provinces like Alberta."

The Liberals' throne speech said that if they don't first tackle the pandemic, they can't move forward on previous commitments to fight climate change or to address systemic racism and economic inequality.

Kenney said premiers had called on the federal government to focus on two priorities: the economy and jobs, and health.

"These issues were not addressed," he said. "There was space for every bright, shiny object, every possible political distraction. Kooky academic theories like intersectionality found their way into yesterday's throne speech."

However, there wasn't anything in the speech to address federal health transfers to the provinces as they cope with an aging population and the pandemic, Kenney said.

The throne speech featured policies, such as the clean fuel standards, that could further hurt the oil industry, he added.

"All we are asking of the government of Canada is to let this province and our resource industry to get off their knees, to get back onto our feet during the largest economic contraction since the Great Depression."

The speech, he said, showed a complete lack of understanding about the current economic crisis.

"It was a fantasy plan for a mythical country that only exists apparently in the minds of Ottawa Liberals and like-minded Laurentian elites, and that forgets about the regions and the resource workers who have been the motor of Canadian prosperity."

He also said Ottawa needs to recognize the fiscal calamity Alberta faces and should give the province $6.5 billion in fiscal stabilization payments.

The throne speech promised to do whatever it takes to protect Canadians' lives and provide financial support for as long as the pandemic continues, including an extension of the 75 per cent emergency wage subsidy through to next summer.

It also promised expanded emergency loans for businesses and targeted financial support for industries hardest hit by the pandemic, including travel, tourism and hospitality.

The speech promised over the longer term to work with the provinces to set national standards for long-term care facilities, where more than 80 per cent of Canada's COVID-19-related deaths have occurred, and to set up a universal pharmacare program.

And it promised to make action on climate change the "cornerstone" of its plan to create one million new jobs.