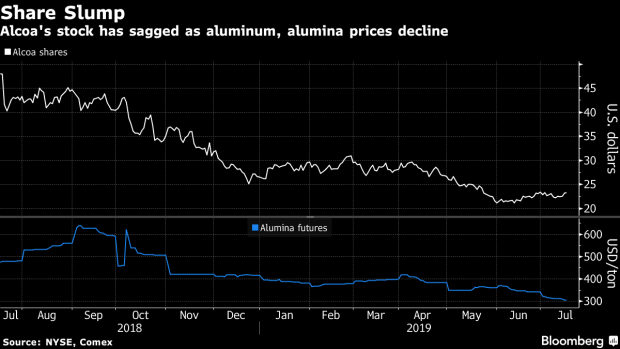 (Bloomberg) -- Alcoa Corp. cut its forecast for global aluminum demand for the second time in three months, adding to concerns that trade frictions are eroding the outlook for the industrial metal.

Aluminum supply will trail consumption by 1 million to 1.4 million metric tons, smaller than forecast in April, as trade tensions and macroeconomic headwinds slow demand in China and the rest of the world, Alcoa said Wednesday when it reported second-quarter earnings.

Over the past year, Alcoa’s shares have fallen by about half amid demand concerns fueled by the U.S.-China trade war and declining prices for aluminum and alumina. Alumina is used to make aluminum and is a high-margin business for the company. The results also come after analysts’ pushed their 12-month share-price target to the lowest in more than two years.

The company sees aluminum use this year growing 1.25% to 2.25%, compared with its previous estimate of 2% to 3%. But China’s stimulus may help strengthen demand for the metal, Alcoa Chief Executive Officer Roy Harvey said during the company’s earnings call Wednesday.

"If you continue to see some of that slowdown inside of their economy, you’re going to see more stimulus that moves from financial to physical and to infrastructure," he said. "That will then give you a number of impacts positive impacts, particularly in aluminum.”

The company estimates the global inventory of the refined metal at 10.7 million tons, about half of which are considered "unreported stocks," Harvey said. About 2.5 million tons of the supply that’s not tracked by exchanges are in China, he said.

The earnings statement was released after the close of regular trading in New York, where Alcoa fell 2.7% to $22.53 at 6:49 p.m. Wednesday.

The Pittsburgh-based company reported a smaller adjusted loss for the second quarter than analysts had expected. It also posted adjusted earnings before interest, taxes, depreciation and amortization of $455 million, topping the $430.7 million average of analysts’ estimate compiled by Bloomberg. Lower pricing for alumina and aluminum was partially offset by higher energy sales and lower costs for raw materials, Alcoa said.

To contact the reporter on this story: Matt Townsend in New York at mtownsend9@bloomberg.net