Alibaba Group Holding Ltd.’s US$11 billion Hong Kong listing is set to propel the financial hub to the top spot globally in terms of fundraising from initial public offerings.

The share sale by the e-commerce giant is a huge boon for Hong Kong, which has been rocked by increasingly violent anti-government protests and earlier this year lagged rival New York exchanges in IPO volumes.

Hong Kong held the top spot last year thanks to a number of multibillion dollar IPOs but dropped to fourth place earlier this year as offerings dwindled. It has been No. 1 for three of the past five years: in 2018, 2016 and 2015.

After a summer drought marked by Anheuser-Busch InBev NV’s failure to pull off a US$9.8-billion IPO of its Asian unit, Hong Kong managed a rebound in the autumn, topping all other exchanges for first-time share sales over September and October.

Alibaba’s smooth sailing in its share sale so far is proof that Hong Kong remains a viable fundraising venue despite raging protests that have forced the cancellation of multiple events and a U.S.-China trade war that has roiled markets.

Still, 2019 is far from over and New York’s markets could still stage a comeback given Hong Kong’s razor-thin lead. And Alibaba’s successful listing does not mean the door is open for everyone. On Monday South African gold mining company Heaven-Sent Gold Group Co. had to shelve its Hong Kong IPO because of "market conditions." 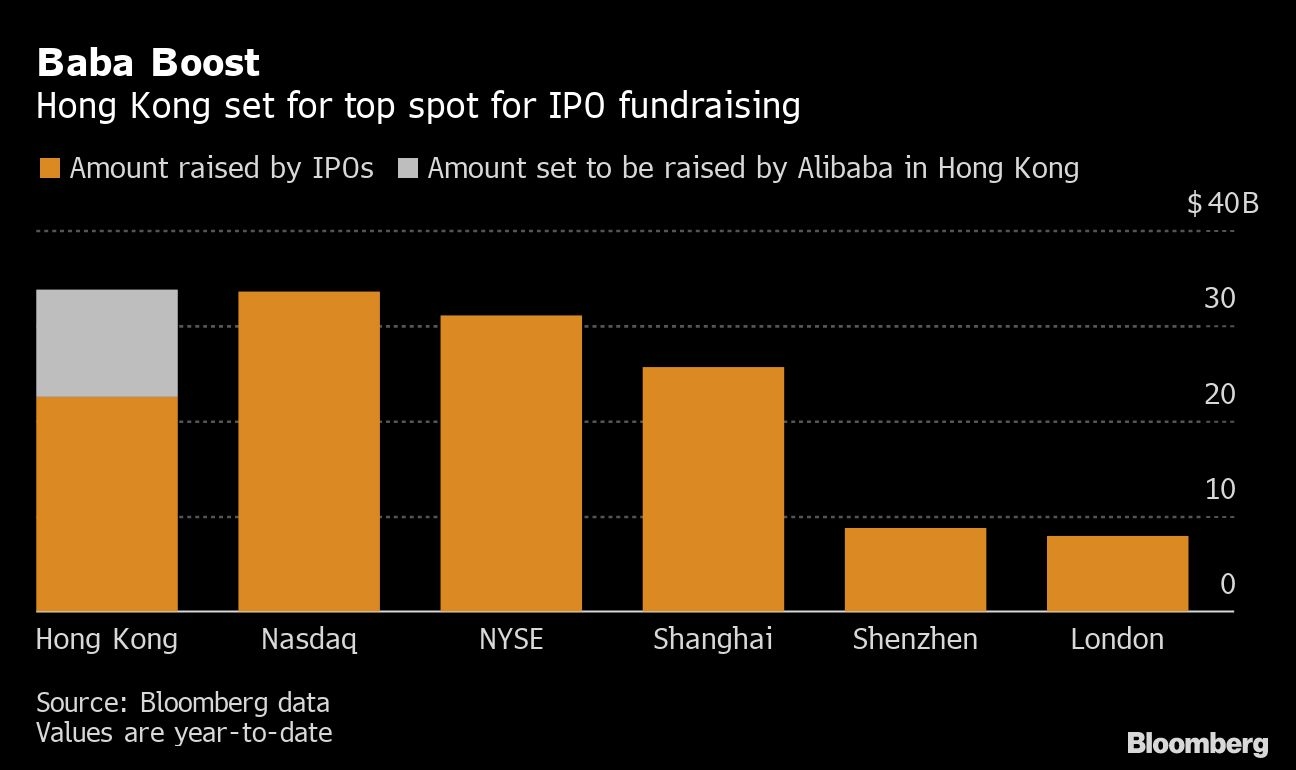 • Wall Street banks working on Saudi Aramco’s share sale are set to lose out on a highly-anticipated fee windfall after the deal was pared back from a record global offering to a mainly domestic affair.

• SDIC Power Holdings is considering proceeding with an offering of global depositary receipts representing A shares of the company, according to a statement.

• An investor in the sports unit of Chinese billionaire Wang Jianlin’s real-estate-to-entertainment group is leading a lawsuit against the company, alleging Wanda Sports Group Co. and its bankers disseminated false and misleading statements related to a July initial public offering.

• Yeahka Ltd., a Chinese payment technology services provider, is planning to raise about US$300 million in an initial public offering in Hong Kong, according to people with knowledge of the matter.

--With assistance from Zhen Hao Toh.