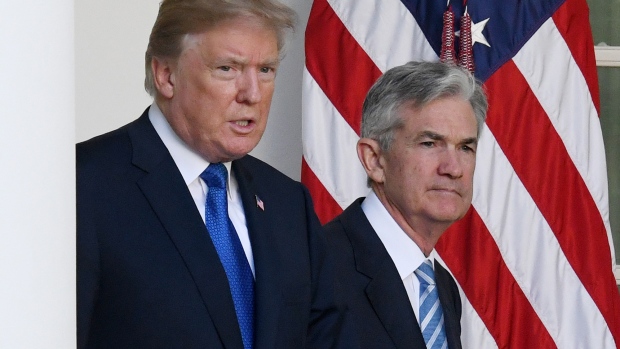 (Bloomberg) -- Federal Reserve Chairman Jerome Powell has been publicly criticized by President Donald Trump over the central bank’s interest-rate increases in 2018 and continued shrinking of its balance sheet. Trump has said the steps will stifle the economy’s growth.

Powell has avoided direct comment but has repeatedly stressed the importance of the Fed’s independence from political pressure and its commitment to transparency and accountability to Congress.

Here’s a timeline of key events and comments:

The president tweets: “The Fed interest rate way too high, added to ridiculous quantitative tightening! They don’t have a clue!” Trump also notes the U.S. has “VERY LOW INFLATION,” calling it a “beautiful thing!”

Trump complains in an interview on CNBC Television that the Fed doesn’t listen to him, contrasting that with the control China’s leader wields over that country’s central bank.

“They devalue their currency. They have for years. It’s put them at a tremendous advantage,” Trump said of the Chinese. “We don’t have that advantage because we have a Fed that doesn’t lower interest rates.”

“China will be pumping money into their system and probably reducing interest rates,” the president tweeted. “If the Federal Reserve ever did a ‘match,’ it would be game over, we win!”

Trump calls for a drastic cut in interest rates to boost the already-healthy U.S. economy. “Our Federal Reserve has incessantly lifted interest rates, even though inflation is very low,” he says in a tweet. In a subsequent post, he adds the economy could soar “like a rocket” if the Fed lowered its benchmark rate by a full percentage point and resumed bond purchases.

With the Commerce Department reporting that first-quarter GDP grew at an annualized pace of 3.2%, the president says the figure would have been higher if not for the Fed. “If we kept the same interest rates and the same quantitative easing that the previous administration had, that 3.2 would have been much higher.”

Trump tweets: “If the Fed had done its job properly, which it has not, the Stock Market would have been up 5,000 to 10,000 additional points, and GDP would have been well over 4% instead of 3%.”

The same evening Powell reassured Democratic lawmakers he would not give in to political pressure, he received an unscheduled phone call from the president. The Fed released no details of the conversation other than to say it lasted five minutes.

Following a roundtable meeting in San Antonio, Texas, the president says his supporters would prefer a Fed chair who doesn’t raise interest rates.

Trump tells reporters the Fed should cut interest rates. “I think they really slowed us down. There’s no inflation.”

He adds that instead of reducing the size of their balance sheet, Fed officials should also be buying additional securities as a way to boost the economy. If the Fed followed his advice, “you would see a rocket ship,” he says.

Trump tweets: “Despite the unnecessary and destructive actions taken by the Fed, the economy is looking very strong.”

Trumps tweets that the U.S. economy “would be in a better place” if the central bank “not mistakenly raised interest rates, especially since there is very little inflation.” The posting followed comments the same day from White House economic adviser Larry Kudlow calling on the Fed to “immediately” cut rates by half a percentage point.

Trump tells tells Fox Business Network the U.S. economy would have grown faster if the Fed hadn’t raised interest rates. “Hopefully now we won’t do the tightening,” he said.

Powell receives a phone call from Trump the same day concerns about the U.S. jobs market helped send stocks to their biggest weekly drop of the year.

Trump hosts Powell, Fed Vice Chairman Richard Clarida and Treasury Secretary Steven Mnuchin for dinner at the White House to discuss the U.S. economy. Immediately following the gathering, the Fed releases a statement saying Powell “did not discuss his expectations for monetary policy” with the president.

In Christmas Day remarks to reporters at the White House, Trump responds to a question about Powell: “Well, we’ll see. They’re raising interest rates too fast. That’s my opinion. But I certainly have confidence. But I think it will straighten. They’re raising interest rates too fast because they think the economy is so good. But I think that they will get it pretty soon. I really do. I mean, the fact is that the economy is doing so well that they raised interest rates and that is a form of safety in a way.”

“The only problem our economy has is the Fed,” Trump tweets. “They don’t have a feel for the Market, they don’t understand necessary Trade Wars or Strong Dollars or even Democrat Shutdowns over Borders. The Fed is like a powerful golfer who can’t score because he has no touch - he can’t putt!”

Mick Mulvaney, Trump’s pick for the next White House chief of staff, says he’d spoken to Treasury Secretary Steven Mnuchin and that Trump “now realizes he does not have the ability” to fire a Fed chairman.

Mnuchin, in a posting on Twitter, quotes Trump as telling him, “I never suggested firing Chairman Jay Powell, nor do I believe I have the right to do so.”

Bloomberg News reports that Trump has discussed firing Powell as his frustration intensified following the most recent interest-rate hike and months of stock-market losses.

The Fed raises interest rates by a quarter percentage point.

“It is incredible,” Trump tweets, “that with a very strong dollar and virtually no inflation, the outside world blowing up around us, Paris is burning and China way down, the Fed is even considering yet another interest rate hike. Take the Victory!”

Trump tells Reuters “I think it would be foolish” for the Fed to raise interest rates. “But what can I say?” he says. “You have to understand, we’re fighting some trade battles and we’re winning. But I need accommodation too.”

Trump tells the Washington Post he’s “not even a little bit happy with my selection of Jay.” On what threatens the U.S. economy, Trump adds, “I think the Fed is a much bigger problem than China."

“I’m doing deals and I’m not being accommodated by the Fed,” the president says. “They’re making a mistake because I have a gut and my gut tells me more sometimes than anybody else’s brain can ever tell me.”

The president tells reporters that the central bank is a "problem" and that he would “like to see the Fed with a lower interest rate.”

The president tells The Wall Street Journal he “maybe” regrets appointing Powell to head the Fed. He declines to say what circumstances would cause him to want to remove Powell, but adds, “I’m not going to fire him.”

Trump says he was intentionally sending a direct message to Powell that he wanted lower interest rates, even as he acknowledged that the central bank is an independent entity.

In a Fox Business Network interview, Trump calls the Fed his “biggest threat,” again criticizing the central bank for endangering economic growth through interest-rate hikes. Trump says the central bank is “independent so I don’t speak to them, but I’m not happy with what he’s doing because it’s going too fast.”

Trump slams Fed policy during a campaign rally in Pennsylvania, complaining “they’re so tight. I think the Fed has gone crazy.” He later says during a telephone interview on Fox News that the central bank was “going loco” for raising rates.

The Fed raises interest rates by a quarter percentage point.

“We are doing great as a country,” Trump says at a press conference in New York. “Unfortunately they just raised interest rates a little bit because we are doing so well. I am not happy about that.”

“We are not being accommodated,” Trump says in an interview with Bloomberg News in the Oval Office. “I don’t like that.”

“That being said,” he continues, “I’m not sure the currency should be controlled by a politician.” He also says he didn’t regret appointing Powell.

In private remarks at a fund-raiser on Long Island Trump says he expected Powell to be a cheap-money Fed chairman and lamented to wealthy Republican donors that his nominee instead had raised interest rates, according to three people present.

Trump turns to social media to take another shot at the Fed. “China, the European Union and others have been manipulating their currencies and interest rates lower, while the U.S. is raising rates while the dollars gets stronger and stronger with each passing day -- taking away our big competitive edge," Trump tweets. “The United States should not be penalized because we are doing so well.”

The president makes his first critical remarks about the Fed. “I’m not thrilled” the central bank is raising borrowing costs and potentially slowing the economy, he says in an interview with CNBC. “I don’t like all of this work that we’re putting into the economy and then I see rates going up."

At the Rose Garden ceremony marking his nomination by Trump to the chairmanship, Powell is careful to slip into his remarks a reference to the Fed’s independence: “I strongly share that sense of mission and am committed to making decisions with objectivity and based on the best available evidence, in the longstanding tradition of monetary policy independence.” Trump says he picked Powell because, “He’s strong. He’s committed. He’s smart.”

To contact the editors responsible for this story: Alister Bull at abull7@bloomberg.net, Margaret Collins