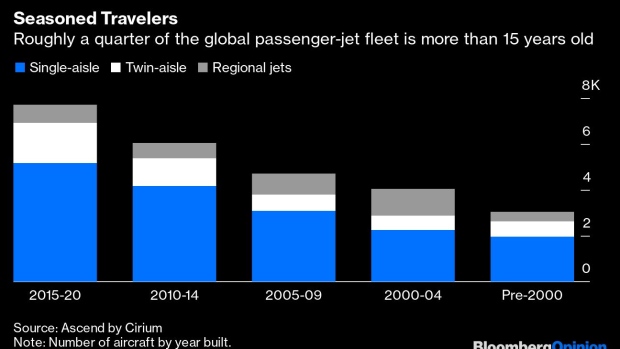 (Bloomberg Opinion) -- Fly from New York to London, and you may occasionally travel back in time. British Airways flies more Boeing 747-400s than any other passenger airline, roughly one in five of those still in operation. Every so often, a Trans-Atlantic trip involves trying to catch a few hours of sleep on one of these old workhorses.

That may never happen again. Folks will still make the trip across the pond; it just isn’t likely to be on one of those old 747s again. That matters a great deal for the oil market.

Jet-fuel demand has declined more in percentage terms than any other petroleum product, according to the International Energy Agency’s initial assessment of the impact of Covid-19, released Thursday. That’s both for the first quarter and, under current estimates, 2020 as a whole. Demand for seats has all but evaporated. About 110,000 travelers passed through U.S. Transportation Security Administration checkpoints each day last week, compared with more than 2 million for the same days in 2019.

Even with jet fuel suddenly much cheaper, the thirstiest planes get grounded first, and those tend to be the oldest. Of the 141 Boeing 747-400s tracked by Ascend by Cirium, a consultancy, 94% aren’t flying (including all of BA’s), versus about two-thirds for the global passenger-jet fleet as a whole. The average age of those 747s is about 22 years, but anything over 15 years is getting long in the tooth, and more than a quarter of the world’s fleet fall into that cohort.

If the big question is how quickly demand will return, then answering it is all but impossible. Rob Morris, global head of consultancy at Ascend by Cirium, says he had worked on the assumption that two big supports — business travel driving global commerce and leisure travel stemming from globalization and migration — “would remain robust.” Now, given social distancing, economic damage and changes to how many people work, “anybody who talks about demand recovery in a year or two is probably being somewhat optimistic.” Boeing Co. CEO Dave Calhoun echoed that presenting predictably dreadful results on Wednesday, saying passenger traffic might not resume 2019 levels for three years.

He also raises more existential questions. Will people be happy to go back to sitting cheek-by-jowl, or has the trend of packing people in “reached its natural Darwinian limit”? Possibly, we’ll be fine with that as soon as we’re fine with, say, taking the subway again. Still, Mann suggests fares must rise anyway to accommodate the extra cost of more stringent cleaning and longer turnaround times at the gate. He estimates industry capacity in 2022 will be 25-30% smaller than it was before Covid-19 struck.

The economics and sheer uncertainty mean a generational cull of aircraft is coming. "Anything that was scheduled to retire over the next five years has an accelerated path towards retirement, just to be very simple and straightforward," Delta Air Lines Inc. CEO Ed Bastian said on an earnings call earlier this month.

As our colleague David Fickling writes, Covid-19 has revealed the shortcomings of long-term demand models touted by Boeing and Airbus SE. In a new report, Barclays Plc analyst David Strauss estimates a roughly 40% cut in demand for new aircraft over the next three to four years relative to previous expectations. As and when the market recovers, it will involve more efficient models. So jet-fuel demand will lag what is already an uncertain recovery in plane trips.

Looked at one way, this may seem unwelcome but not terrible for oil. While the forecast demand decline this year is the biggest in percentage terms, those missing 2.1 million barrels a day pale in comparison to the almost 5 million taken out of the gasoline and diesel pool.

But that ignores the first thing I mentioned: time.

While jet fuel was only 8% of global oil demand in 2019, it has an outsize role in expectations of demand growth. In BP Plc’s latest set of long-term projections, released a year ago, aviation accounted for 64% of the projected growth in consumption of transportation fuel by 2040, compared to 2017. For oil demand growth as a whole, jet fuel is 44%, or almost one in two of every incremental barrel.

Now try this number for size: 79%. That’s jet fuel’s share of the projected growth in demand for refined products, rather than other liquids. In other words, in these projections, aviation is pretty much all of the long-term growth in crude oil demand.

This is a product of two broad assumptions: air travel increasing as emerging-market incomes rise in a globalizing world, and the difficulty of switching planes to alternative energy sources (other than biofuels). The first assumption has been shot down or, on a very optimistic reading, deferred by many years. Globalization was breaking down even before pestilence struck, and Covid-19 will leave deep scars on both the idea and the economy beneath it.

The second concept remains real enough for large commercial jets. Current battery technology doesn’t cut it (in part because, unlike liquid fuel, battery weight doesn’t decrease across a flight). But that concept also highlights the broader problem for oil.

Road transportation, which takes almost half the world’s oil supply, is already vulnerable to electrification, and that will only intensify. That’s why sources of demand like aviation or plastics are touted as oil’s path to growth from here. Yet plastics demand growth looks overblown (see this), and now the narrative about jet fuel is similarly damaged goods.

The passing of those old 747s hauling people across the Atlantic will be a milestone in aviation history. It will also herald a fundamental shift in oil — toward peak demand.