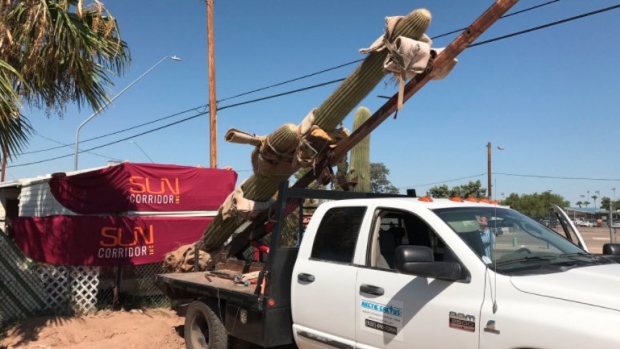 Amazon rejected this gift of a giant cactus from Tucson, Ariz. as part of its bid to be home to the company's second headquarters. , Image courtesy of @amazonnews via Twitter

TUCSON, Ariz. — Amazon has rejected the 21-foot (6.4-metre) Saguaro cactus that southern Arizona economic leaders planned to send as a gift to CEO Jeff Bezos, in a bid to attract the company’s second headquarters.

“Unfortunately we can’t accept gifts (even really cool ones),” an Amazon tweet read.

Amazon (AMZN.O) says it is instead donating the cactus to the Arizona-Sonora Desert Museum in Tucson.

Sun Corridor Inc., an economic development group, said it was sending cactus last week, saying it symbolizes that Tucson has the room to grow with the online retailer. Tucson is one of many cities competing for Amazon’s second headquarters, which the company says will result in up to 50,000 new jobs and a US$5 billion investment.

“We’re thrilled they took notice - that was our intent. We wanted to be bold in sending a creative message of ‘we have room for you to grow here for the long term’ - nothing signifies that better than a saguaro,” Sun Corridor Inc. spokeswoman Laura Shaw said in an email to The Associated Press.

Shaw said it will be an intense competition for Amazon’s second headquarters and that the project has the power to transform a community.

“We will demonstrate that we are a great fit and have the right assets to win this deal: technical talent, great universities, a booming downtown, among others,” Shaw said.

Cities have until Oct. 19 to submit proposals.

Tucson will be competing with Chicago, Detroit, El Paso, Philadelphia, Toronto, Pittsburgh and others, although no other city appears to have made a gesture as big as offering a massive plant.

Amazon is expected to choose a location by 2018.