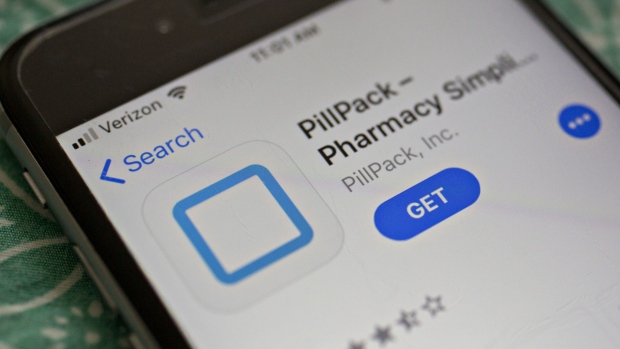 The PillPack application is displayed in the App Store on an Apple Inc. iPhone in an arranged photo taken in Washington, D.C., U.S., on Thursday, June 28, 2018. , Bloomberg News

Getting into the pharmacy business was easy for Amazon.com: It paid US$753 million to buy the mail-order startup PillPack. The hard part has been prying patients away from their local drugstore.

Since being acquired by the internet giant, PillPack has run into stiff opposition, from chains like CVS with thousands of stores to family-owned operations with a single shop. Having seen their business of selling shampoo and razor blades chipped away by online sellers, the drugstores are trying to keep Amazon from wresting away their piece of the $333 billion U.S. prescription-drug industry.

PillPack’s selling point is simple. For people who take multiple medicines a day, it will replace a confusing jumble of pill bottles with neatly sealed packets stamped with the time they’re supposed to be taken. But to make the process seamless for customers, PillPack needs to ask a patient’s pharmacy or doctor to transfer their prescriptions.

While it’s always faced some pushback, PillPack contends that after Amazon said it was buying the startup in June 2018, its faxed requests for prescription transfers started being slow-walked or even completely disregarded.“People take it and throw it in the trash or ignore it and don't do anything with it,” said TJ Parker, PillPack's 33-year-old co-founder and chief executive officer, in an interview.

And when PillPack technicians call to follow up, some pharmacists are “literally hanging up the phone without saying anything, which happens probably daily.”When PillPack was new, there was rarely a problem getting prescriptions transferred, according to interviews with three former PillPack pharmacy technicians, who requested anonymity to discuss sensitive information. But once it hit the radar screen of the big chains, transfers became harder as drugstores increasingly insisted on direct confirmation from the patients, they said.

Patients who take multiple medicines are a huge and lucrative market because pharmacies are typically paid a fee or markup on each prescription. An estimated 23.1 per cent of the U.S. population — more than 70 million people — takes three or more prescription drugs per month, and 11.9% take five or more drugs each month, according to the U.S. Centers for Disease Control and Prevention.

Those are the users PillPack wants, but they’re also customers that CVS Health Corp., Walgreens Boots Alliance Inc. and Rite Aid Corp. want to keep. And the chains, which together operate more than 20,000 drugstores in the U.S., aren’t giving in without a fight.Amazon, which is also partnering in an employee health venture with JP Morgan Chase & Co. and Berkshire Hathaway Inc., didn’t need Barnes & Noble’s permission to start selling books online. But in its foray into the drug business, it needs the acquiescence of the very pharmacy companies it hopes to supplant. That’s created a dynamic rife with conflict. CVS and other drugstores say any delays in the process are because they’re trying to make sure their customers are aware that they had agreed to have their prescriptions transferred. PillPack, on the other hand, maintains that it always gets consent and that the chains are purposely stonewalling to hang on to an outdated, inefficient retail model.

PillPack is aggressively trying to work around any stall tactics. Its workers are following up faxed transfer requests with phone calls to make sure they aren’t ignored. They are increasingly contacting patients' doctors to write new prescriptions as an alternative to getting existing ones transferred. And the company is carefully tracking pharmacies that it believes have been uncooperative. While laws vary, states generally require pharmacies to fulfill valid prescription-transfer requests.

Parker, a second-generation pharmacist, worked as a teenager in his father's New Hampshire drugstore before co-founding PillPack in 2013 with Elliot Cohen, an engineer and entrepreneur, with the goal of developing a less-confusing, simpler system for patients on multiple medicines.

Soon after the Amazon deal, things started to change, said Parker.“We started to see what I call systemic resistance from the large retailers,” he said. Now a “significant portion” of transfers don’t go through, forcing PillPack to get doctors to write new prescriptions.

“If you're a customer attempting to move pharmacies, it should be seamless,” Parker said during a recent interview at Bloomberg headquarters in New York.

Drugstores deny slowing down the transfer process. CVS processes all transfer requests “legitimately requested by patients,” company spokesman Michael DeAngelis said in a statement. “Last year, we notified PillPack to stop any activity to initiate prescription transfers without the informed consent of our pharmacy patients.”Rite Aid said it follows all state, local and federal rules and regulations regarding transferring prescriptions. Walgreens said it makes every effort to transfer prescriptions in a timely manner.

“In the event there is a question as to whether we have a patient’s consent, we do validate those requests with the patient,” Walgreens said in a statement.

CVS and Walgreens sent cease-and-desist letters to PillPack in 2018, warning the company against transferring customers without their consent. Since then, both chains have taken steps to ensure that patients really want to switch.

In June of this year, CVS obtained a federal court injunction preventing a former senior vice president from working at PillPack. In court papers, CVS alleged the executive would have provided sensitive pricing data to a competitor. The executive is appealing, calling the non-compete agreement “overly broad” and “unenforceable.”

And in July, Surescripts, an electronic prescribing network owned by CVS, Cigna Corp.’s Express Scripts unit and two drugstore trade groups, cut PillPack off from a prescription-history database it had been obtaining from a third-party vendor. It alleged the vendor had misused the data, and referred the matter to the FBI.

PillPack denies any wrongdoing and claims that rivals are just worried about competition. The company said it accessed a prescription history from a vendor only after it obtained a patient’s consent. Among other things, the data was used to speed the online signup process so patients didn’t have to go rummaging through the medicine cabinet to remember their drug lists, said Parker. It's exactly the sort of digital information that patients should have access to, he said.

“We unequivocally do not transfer customers without their consent,” Parker said. The online signup process makes it “incredibly clear” that PillPack’s service requires a pharmacy switch, he said. The company is vulnerable to pharmacies trying to persuade patients to change their mind, and there’s no stopping competitors from offering a similar service. CVS started doing that nationwide last year when it expanded a packaging business it has offered in some states since 2014.

CVS is “not leaving any white space or unmet customer need” that upstarts can capitalize on, said Chief Executive Officer Larry Merlo.

An undated CVS training document viewed by Bloomberg News instructs pharmacy employees on how to react if they get a transfer request from PillPack or similar competitors.

“We unequivocally do not transfer customers without their consent,” PillPack’s CEO says

PillPack technicians interviewed by Bloomberg said some pharmacists would hang up as soon as they heard where the call was coming from or said they would talk only to PillPack pharmacists, not the technicians who usually called.Local independent pharmacists say some of their customers appear confused over the terms of the PillPack service. Wolkar Drug, a pharmacy in Baxter Springs, Kansas, has gotten PillPack transfer requests for five patients since late 2017.

“All the patients I talked to, minus one, said they were confused, they didn’t understand it and they didn’t want to transfer,” said Brian Caswell, the pharmacy’s president. All but one stayed, and that patient later returned.

After it lost two patients to PillPack last fall, Best Value Rhome Pharmacy near Fort Worth, Texas, started immediately calling patients when it got PillPack transfer requests, said pharmacist-owner Carter High. He said he tells the patients about the $150,000 multi-dose packaging machine his pharmacy now owns, which allows the store to offer PillPack-style service. Since then, “I’ve been able to keep them all in-house,” High said.

Despite its high-tech pedigree, PillPack, through at least the middle of 2018, got some signups the old-school way: from a call center in the Salt Lake City area, according to former employees. There, sales reps on commission made dozens of calls each day to patients, many of whom were elderly and sometimes unaware of PillPack, say the former representatives.

Before putting through paperwork, representatives were required to inform the customer that the service required a switch. Most patients “knew very well what they were signing up for,” said Tanner Berg, who worked part-time in the call center for a year until he left for another job in 2018.

Under Amazon, PillPack has since eliminated the outbound calls to patients. Now, “the vast majority” of customers sign up online, Parker said.Despite the pushback from its competitors, PillPack has grown steadily since joining the Amazon stable, Parker said. It’s exploring deals with health plans and insurers.“There's a ton of opportunity to continue to improve the mobile tools and actual seamlessness of the experience," he said.