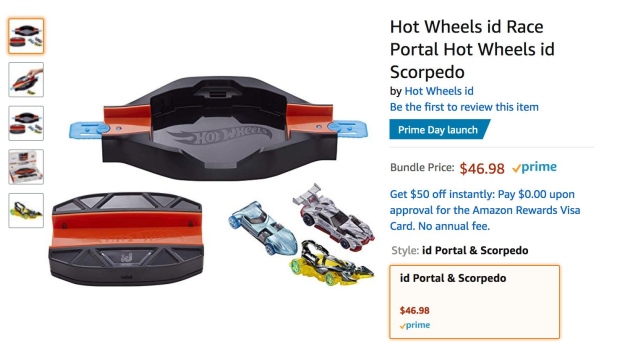 Toymakers including Mattel Inc. and MGA Entertainment Inc. are using the e-commerce giant’s annual sales event to roll out new products and learn more about customers ahead of the critical holiday season. For the first time, Mattel is gearing up for a global launch on Prime Day, including a new item from Hot Wheels. MGA released six new products as part of the event’s “early launch,” including four new Viro Rides scooters, and it has more releases planned for next week.

The invented sales holiday, this year set for July 15 and 16, generates revenue that toymakers would typically miss during the slow summer. And while those sales will still pale in comparison to the holiday-season windfall, there’s an added benefit as Prime Day offers clues to help companies plan for the surge around the corner.

“They’re learning about how consumers are changing their cadence of behavior offline and online through events like this,” Stephanie Wissink, an analyst at Jefferies, said in a phone interview. “If they put out a unique item or launch a unique brand around this event, does it gain traction? What can they learn from it that they can apply in time for the holidays?”

July typically registers as one of the slowest months for toy sales. Even if Prime Day sales accounted for 10 times the average day in July, it still wouldn’t match a typical day near year-end, Wissink said. Amazon.com Inc. is forecast to take in $5.8 billion from the event this year, an almost 50 per cent surge attributable in part to 12 extra hours of shopping.

Some 70 per cent of toy sales occur in a year’s final three months, Jefferies estimates, and Mattel still sees Prime Day as an incremental event, Chief Commercial Officer Steve Totzke said in a phone interview. He added that Prime Day doesn’t lead to so-called pantry loading -- when consumers buy toys but stash them to use as holiday gifts.

“It’s a great chance to get people exposed to the category in the middle of July when people aren’t necessarily thinking that much about toys,” Totzke said.

Where Prime Day helps is drawing attention. Isaac Larian, chief executive officer of Bratz- and Little Tikes-maker MGA, said in an email that the event drives “a lot” of traffic and new customers to the company’s product pages. Totzke said the “tremendous” exposure during the event brings tens of millions of people to view Mattel products.

But not everyone is buying in. Hasbro Inc. is not taking part in Prime Day this year with special promotions and had no additional details to share, spokeswoman Crystal Flynn said in an email.

With the industry finally climbing out of the hole created by the 2017 bankruptcy of retailer Toys “R” Us, Prime Day is a way to see what works best for digital buyers, said Brett Andress of KeyBanc Capital Markets in Cleveland.

“Online has always been important for these guys, and it got a lot more important last year with the removal of Toys ‘R’ Us, so they’re trying to leverage different channels,” he said, adding that he expects toymakers to evolve, adding more products and exclusives tied to the day.

“I can only see it getting bigger as Prime Day gets bigger,” Andress said.