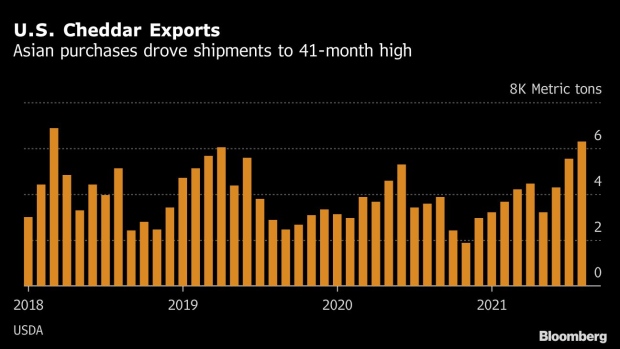 (Bloomberg) -- U.S. exports of American cheese -- including the processed staple coveted for melty grilled cheese sandwiches -- are surging as buyers in Asia devour the stuff.

Shipments in August increased by 71% from a year earlier to just over 9,000 metric tons, according to data from the U.S. Department of Agriculture. That’s the highest since March 2018.

Demand was strong from China, Australia and the Philippines, boosted by more consumption in quick-service restaurants as Covid-related restrictions eased in some places. U.S. cheesemakers have has also seen some easing in shipping hurdles, said Matt Gould, principal & president at The Dairy Market Analyst.

The USDA category for American cheese also includes cheddar and colby. The overall surge was driven by a jump in demand for cheddar, with exports of the variety reaching the highest in 41 months.

“It’s been a challenge for U.S. dairy exports to obtain freight, but as the year has gone on, our traders have simply gotten better at it,” he said. “We are finally moving stuff to countries like the Philippines.”