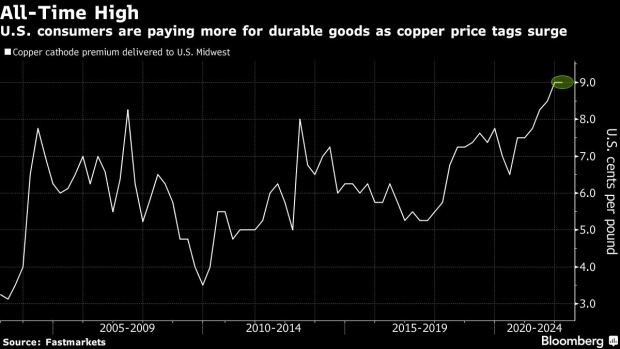 (Bloomberg) -- Surging prices of the raw materials needed for your refrigerators, automobiles, window frames and plumbing show no signs of abating as America’s supply-chain crisis spills into another year.

John Gillespie is seeing the issues continue to mount across the country. The commodity manager for Superior Essex helps supply a large chunk of the metal wiring that electrifies U.S. homes and power grids and said the shipping and logistics charges for copper and aluminum are the most significant increase as part of the all-in cost.

Ongoing pandemic-triggered snarls are boosting the cost of trucks and rail cars to move things around, causing delays in shipping materials to consumers. Manufacturers of products are paying a record price to get hold of copper and aluminum, key metals used in everything from wires to electronics to automobiles. The benchmark price to ship copper in the U.S. is at the highest in data going back to 2003, while the cost to transport aluminum now accounts for 20% of the metal’s total price.

“Boats are stuck out at sea and rail doesn’t have enough staff, so rail yards are crowded and my material is stuck behind 1,500 cars so they have to dig that out and it takes days to do that,” Gillespie, who works for one of the nation’s largest suppliers of wiring, said. “The perfect storm is having a ripple effect and people are calling for metal, but the material is just not there.”

Supply-chain snags dominated headlines through most of 2021, catapulting commodities prices to the highest in more than a decade as a rebound in demand from pandemic lockdowns was met with constrained supplies. The move fueled inflation around the world and forced governments to act, with many hoping attempts to alleviate hangups would smooth out the market this year.

Buyers typically pay a premium over prices on the Comex bourse to have copper delivered to the U.S. Midwest. That cost surged to a record high of 9 cents a pound, according to Fastmarkets that goes back to 2003. That’s 20% higher than the level before the pandemic.

The situation is even more severe in aluminum, which has seen its premium over prices on the London Metal Exchange for U.S. Midwest delivery surge more than 40% in the past two months. For buyers, that translates to an additional $768 per metric ton on top of the raw metal price of about $3,100 a ton.

Prices of industrial metals cooled off toward the end of the year, but staged another rally since late December as energy prices, geopolitical concerns and the omicron variant put even more pressure on an already broken supply chain. A gauge of industrial metals hit a record high in late January.

Traders said copper and aluminum are available if you want them, but the metals just aren’t in the right places to take advantage of the limited supply of trucks and rail cars. A push to encourage truckers in Canada and the U.S. to get vaccinated is making matters more difficult, with hangups reported at key border crossings for aluminum. Canada is the largest aluminum supplier to the U.S., accounting for about 50% of all American consumption.

To be sure, not everyone thinks the high shipping charges will last much longer. In fact, they could start cooling off as soon as the second quarter of this year, according to researcher Harbor Intelligence.

“We believe that we’ll see a sharp decline from second quarter on because we see the logistics logjam gradually dissipating,” said Jorge Vazquez, managing director at Harbor who does research on the aluminum market.

For Jay Richman, who owns New Jersey-based E.W. Berger & Bros., a family-run wholesaler of products from copper pipes and fittings to water heaters and faucets, the end to logistics woes can’t come soon enough. Richman said he has to wait three months for his orders to be delivered. A year ago, the waiting time was about six weeks. And before the pandemic, it was about two to three weeks.

“They put me on quota -- if I want to buy 500 pieces of copper, they’d tell me they’d send me 50. When I get the delivery, maybe it’s 10.  I don’t see anything where it’s getting better,” said Richman, who buys from domestic manufacturers and sells products to companies like Amtrak. “Now everybody wants to get back to normal, and everyone is ready to roll. I have a lot of business, but I just don’t have the materials. These could be my best years if I had the material, but I don’t.”