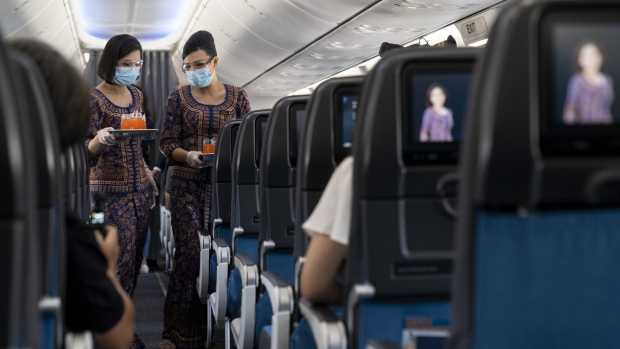 The refitting of the economy class cabin of a Boeing Co. 777-300ER aircraft, operated by Air France-KLM, at the Air France Industries hanger at Orly Airport in Paris, France, on Tuesday, Sept. 27, 2022. Air France will progressively equip twelve of their 777-300ER aircraft with new business class seats for international flights and complete all the business cabins in the airline's fleet in 2023. , Bloomberg

(Bloomberg) -- Back in August, Federal Aviation Administration officials asked the public for their views on how safe they thought airline seats were when it came to their size.

What did they expect?

Fed up with being crammed in alongside other unhappy customers, passengers flooded the agency with nearly 25,000 comments by the deadline on Tuesday.

While many stuck to the FAA’s request to address whether the seat width, length, pitch and other dimensions were a direct threat to travelers’ safety in the event of an emergency evacuation, many also took the opportunity to slam comfort levels in typical economy cabins.

“As a larger woman (311 pounds, 5 foot 6 tall) I can attest that current seat sizes are not safe, let alone comfortable for myself or my seat mates,” said one commenter who gave her name as Meredith Schwartz, of Brooklyn, New York.

“I cannot reach under my seat to retrieve a life jacket,” she continued. “There is nowhere for me to stand to pull up a seat cushion to be used as a flotation device. Getting into and out of the small seats is a slow and complicated procedure. While I have never had to do so in a rush, in low light or smoke conditions, or with scared fellow passengers trying to get out around me, I can vividly imagine how poorly it might go.”

Congress ordered the agency in 2018 to issue rules for minimum dimensions of passenger seats with regard to safety. A 2021 agency study determined that current seat sizes would be safe during an evacuation for 99% of the population.

It noted that passengers were more likely to experience safety issues when using evacuation slides incorrectly, with some hesitating at the door and holding others up, while others — “typically young men” — launched themselves onto the slide causing the potential for a pile-up at the bottom. The FAA also said in a report to Congress in March that passengers trying to take carry-on bags with them during evacuation increased risks.

Many commenters appeared to disagree with the findings, raising issues such as the increased risk of deep vein thrombosis — blood clots, often in the legs — when being forced to spend hours in cramped conditions. Others responded saying they thought current seat sizes were fine.

Here’s a look at a few more comments:

--With assistance from Alan Levin.