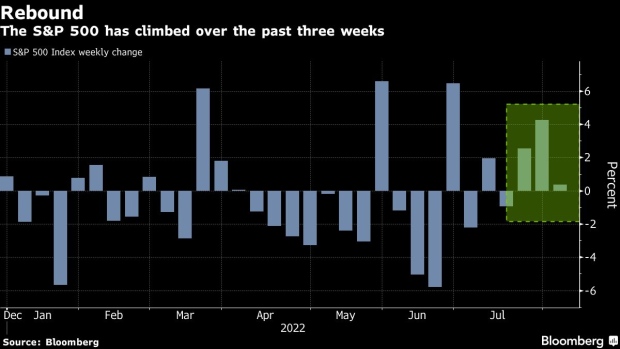 A statue of a bull outside of the Enbridge office in Calgary, Alberta, Canada, on Monday, June 20, 2022. Calgary, surrounded by fields of oil, natural gas, wheat and barley that make Canada a global exporting powerhouse, is at the epicenter of a post-Covid economic expansion. Photographer: Gavin Bryan John/Bloomberg , Bloomberg

An index of global sell-side ratings “is back to peak bullishness levels reached in 2000 and 2007, after which global equities halved,” strategists led by Robert Buckland wrote in a note.

While analysts always have more buys than sells, “they seem especially keen right now,” the strategists said. That has triggered a red flag in Citi’s “bear market checklist,” which otherwise has seen warning signs ease this year as markets have declined.

The peak in analyst optimism comes amid a rebound that has seen the S&P 500 climb more than 10% from its June low, even as economic data emboldens the Federal Reserve to tighten policy even further to tame inflation. According to Citi, there are “few fears” of an oncoming recession.

By region, analysts in emerging markets and the US are more bullish than those in Europe and Japan, the strategists said. By sector, net buy recommendations have risen most for consumer discretionary and materials stocks over the past 18 months, while those for information technology, utilities and communication services have increased the least.

They also highlighted that their recommendation index gave a false sell signal in 2012, when global stocks were little changed in the following year.