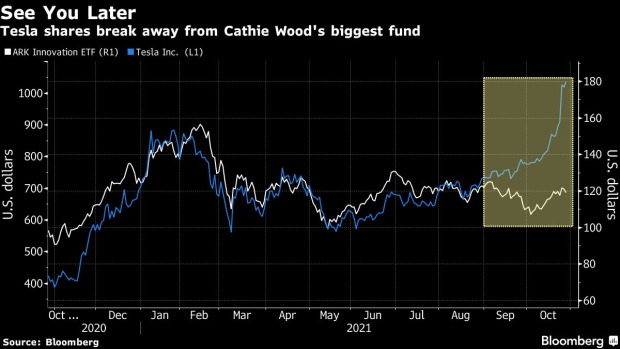 (Bloomberg) -- A planned exchange-traded fund designed to take the other side of Cathie Wood’s trades has decided against name-dropping the Ark Investment Management founder.

The not-yet-launched Short ARKK ETF will be changing its name to the Tuttle Capital Short Innovation ETF, though it’s keeping the ticker SARK, according to Tuttle Capital Management LLC chief executive Matt Tuttle. He declined to comment further on the reason behind the switch.

Despite the name change, SARK will still seek to track the inverse performance of the $23 billion Ark Innovation ETF (ticker ARKK) -- the largest fund in Ark Investment Management’s lineup -- through swaps contracts, as described in a July filing with the Securities and Exchange Commission. The ETF will charge an operating expense of 0.75%, in line with ARKK’s management fee.

After a blockbuster 150% gain in 2020 for the firm’s flagship fund, Wood’s hot hand has cooled as of late. ARKK has dropped 4.7% so far this year, dragged down by a series of misfired bets in biotech and stay-at-home companies. Additionally, Wood’s funds have been offloading shares of the Tesla Inc. -- ARKK’s top holding -- over the past several months amid the electric-vehicle maker’s 47% surge this year.