Apple and Brookfield Asset Managament are attractive to buy in a pullback: Christine Poole

Apple Inc. took the most aggressive step yet to strip Intel Corp. chips from its computers, announcing more powerful homegrown Mac processors alongside a total revamp of its MacBook Pro laptop computers.

With the new processors and devices, Apple is aiming squarely at the high-end chips that Intel has provided for the MacBook Pro and other top-end Macs for about 15 years. Last year, Apple started transitioning its low-end Macs to its own M1 Apple Silicon chip. The new chips, however, are a bolder stroke, aiming at far outclassing Intel’s highest-performing products.

Apple shares rose as much as 1.4 per cent to US$146.80 after the event. They had gained 9.2 per cent this year through the end of last week. 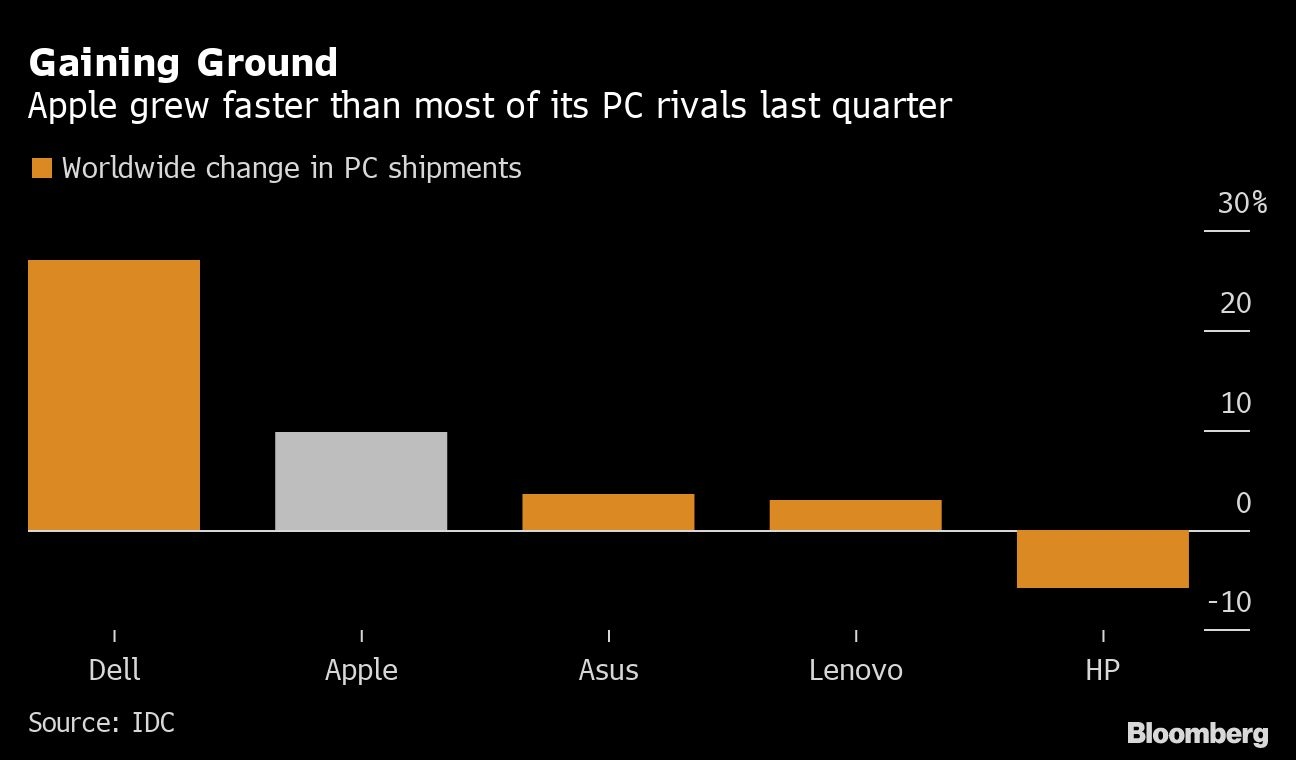 Apple is also upping the graphics performance for the M1 Pro and M1 Max, which come with 16 and 32 graphics cores, respectively. That’s up from the seven or eight-core options offered with the M1 Macs. Graphics performance with the M1 Max is as much as four times faster than on the earlier M1 chip, while the M1 Pro is twice as fast, Apple said. It’s also 13 times faster than earlier Intel models.

The new chips are at the center of the most significant update to the MacBook Pro since 2016. The new model comes in 14.2-inch and 16.2-inch screen sizes, and -- like the latest iPad Pro -- the displays use miniLED panels. That technology allows for improved color reproduction. The screens also have 24 per cent thinner borders on the side and a 60 per cent thinner border at the top thanks to a new display cutout. That feature, also called a notch, makes the display look more like the one on an iPhone.

The new models have an updated, boxier look and lack the controversial Touch Bar, the touch-screen strip introduced with the 2016 redesign. Apple replaced the Touch Bar with a new circular fingerprint scanner and larger physical function keys. Besides reversing that change from the prior version, Apple is restoring three ports that users missed after they were removed five years ago: the HDMI port, an SD card slot and MagSafe charging.

The displays also include ProMotion, a feature that allows the screen refresh rate to reach higher levels for a smoother overall experience. Apple added a similar feature to the iPhone 13 Pro and iPhone 13 Pro Max in September. And the company is adding a 1080 progressive-scan video-chat camera, improving a component that users of earlier MacBook Pros have found subpar. The microphones and speakers were upgraded as well.

The HDMI connection makes it easier to tie the laptop to a TV or external monitor, while the SD card slot is a convenient offering for on-the-go photographers. MagSafe, meanwhile, makes its return to the MacBook Pro after the feature was added to the iPhone 12 last year. It uses a magnetic charging adapter for the laptop. That means if the charging cord is tripped on, it will be yanked out -- rather than sending the computer tumbling to the floor.

The new 16-inch model can reach up to 21 hours of battery life when watching video, while the smaller 14-inch model has 17 hours, Apple said. The products also support a new fast-charge feature, which can quickly juice the laptop’s battery to 50 per cent from zero.

Bloomberg previously reported on Apple’s plans for the MacBook Pro chips, design and other features.

Despite the growth of wearables and other mobile devices over the past several years, the Mac has remained a steady seller for Apple. The computer line pulled in almost US$30 billion, or about 10 per cent sales, in the last fiscal year. The Mac has also seen its market share grow. It held about 9 per cent of the global personal-computer market in the third quarter, with shipments rising 10 per cent from the period a year earlier, according to data from IDC. That made Apple the second-biggest gainer in the PC market, after Dell Technologies Inc.

One challenge Apple may face with its new MacBook Pro is the ongoing chip shortage and supply-chain slowdown sparked by the Covid-19 pandemic. The new computer goes on sale Monday and is due to hit stores next week, starting at US$1,999 for the 14-inch model and US$2,499 for the 16-inch model, but shipment delays have hampered other recent launches. Customers trying to order Apple’s latest iPhones, watches and iPads are being told that products won’t be delivered until November or December.

Apple updated the low-end 13-inch MacBook Pro with an M1 chip last year, alongside similar updates to the MacBook Air and Mac mini. It revamped the iMac desktop with a new screen, different design and M1 chip earlier this year. Apple previously said it will complete its transition away from Intel in 2022.