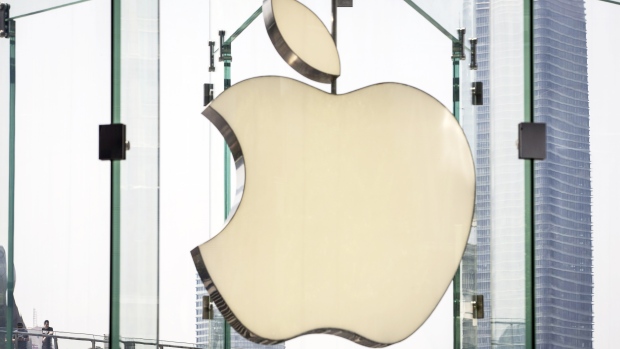 The Apple Inc. logo is displayed above a store entrance in Shanghai, China, on Thursday, May 9, 2019. , Qilai Shen/Bloomberg

Consumers can press ahead with a lawsuit that accuses Apple Inc. (AAPL.O) of using its market dominance to artificially inflate prices at its App Store, the U.S. Supreme Court ruled Monday.

The 5-4 decision could add to pressure the company faces to cut the 30 per cent commission it charges on app sales. Lawyers pressing the case have said they will seek hundreds of millions of dollars on behalf of overpaying consumers. Apple fell 6.1 per cent to US$185.40 at 1:29 p.m. in New York.

Apple contended the lawsuit was barred under a 1977 Supreme Court ruling that said only direct purchasers of a product can collect damages for overpricing under federal antitrust law. That decision was designed in part to keep companies from having to pay twice for the same misconduct.

The Google Play store, Apple’s chief rival to the App Store, takes a similar cut of up to 30 per cent from developers for app sales.

Benjamin Schachter, an analyst at Macquarie Capital, said in a note Monday that "pressure is building" for Apple to lower the 30 per cent commission. "If the rate is lowered at AAPL or GOOG, the other would quickly follow," he wrote.

Apple and its tech-industry allies said before the ruling that a decision allowing the lawsuit could lead to expensive antitrust claims against other companies that run online marketplaces, potentially affecting Alphabet Inc.’s Google, Amazon.com Inc. and Facebook Inc.

The decision also could let consumers sue Amazon by arguing that the fees it charges third-party sellers inflate the prices of products, said Hal Singer, an economist at Econ One Research Inc. and a senior fellow at the George Washington Institute of Public Policy. Like Apple, Amazon charges fees to third-party sellers on its platform and lets those sellers set their own prices.

"Amazon was likely rooting for Apple to win this," Singer said.

"To evade the court’s test, all Apple must do is amend its contracts," Gorsuch wrote. "Instead of collecting payments for apps sold in the App Store and remitting the balance (less its commission) to developers, Apple can simply specify that consumers’ payments will flow the other way: directly to the developers, who will then remit commissions to Apple."

Mark Rifkin, one of the lawyers pressing the suit, called the ruling "a major victory for consumers in an increasingly consumer-unfriendly environment."

When a user buys an app, Apple collects the money, keeps the 30 per cent commission and gives the rest to the developer. The company told the high court it passed US$26.5 billion on to developers in 2017.

Apple is part of an app economy that will grow from US$82 billion last year to US$157 billion in 2022, according to projections from App Annie, a mobile data and analytics platform.

Apple argued that the lawsuit’s focus was the 30 per cent commission, something the company said is paid by the developers, not the app purchasers. Although the consumers said they pay for the commissions through higher app prices, Apple said those are the type of "pass-through" damages barred under the Supreme Court’s 1977 Illinois Brick v. Illinois ruling.

Thirty-one states supported the consumers, urging the Supreme Court to allow the lawsuit and also to eliminate the direct-purchaser requirement altogether by overturning the Illinois Brick decision. Most states already allow downstream purchasers to collect damages, and the group says courts have been able to ensure that companies don’t have to double-pay.

--With assistance from Mark Gurman and David McLaughlin