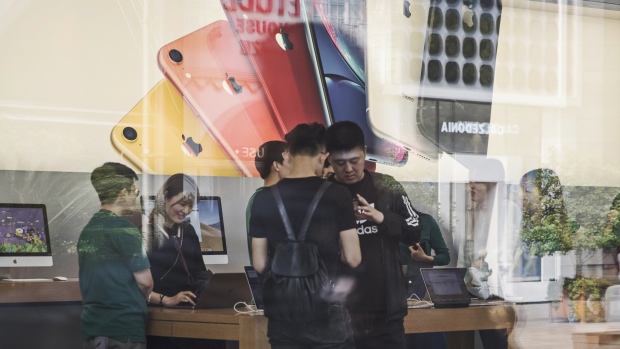 Customers browse products inside an Apple Inc. store in Shanghai, China, on Thursday, May 9, 2019. The U.S. hiked tariffs on more than $200 billion in goods from China on May 10, including circuit boards and telecommunications devices, in the most dramatic step yet of Donald Trump's push to extract trade concessions, deepening a conflict that has roiled financial markets and cast a shadow over the global economy. Photographer: Qilai Shen/Bloomberg , Photographer: Qilai Shen/Bloomberg

Last week, U.S. President Donald Trump effectively banned U.S. companies from working with Huawei. That’s sparked concern on Wall Street about potential retaliation by China, where iPhones are assembled and where Apple gets about a fifth of its revenue.

When trade tensions flared between the U.S. and China late last year, some economists said there was an informal boycott by Chinese consumers of U.S. products, including iPhones. After Apple reported disappointing holiday results, Chief Executive Officer Tim Cook said the trade war was partly to blame.

Trump’s latest move has already prompted dire threats from China, with the country’s ambassador to the European Union warning of retaliation on Monday.

"There is a potential for a boycott" of Apple products, said Shannon Cross of Cross Research. "There could be a movement in China to support national champions."

Apple could lose nearly a third of its profit if China retaliated by banning its products, Goldman Sachs analysts estimated this week. Dan Ives, an analyst at Wedbush Securities, said 3% to 5% of iPhone sales in China may disappear over the next 12 to 18 months because of the U.S. ban on Huawei.

Apple would face much more dire consequences if production restrictions were implemented in China, Goldman analysts led by Rod Hall wrote in a research note.

"We do not believe the company would be able to shift much iPhone volume outside of China on short notice, though actions that would push Apple production outside of China could have negative implications for the China tech ecosystem as well as for local employment," the Goldman analysts said.

Even if China doesn’t retaliate directly, nationalist sentiment will likely hurt Apple’s sales in the country and could cause the company to miss its fiscal third-quarter forecasts, according to Lynx Equity Strategies. Apple didn’t respond to requests for comment on Tuesday.

In late April, before Trump’s Huawei ban, Apple reported slightly better iPhone sales in China. "There’s an improved trade dialog between the U.S. and China, and from our point of view, this has affected consumer confidence on the ground there in a positive way," Cook told analysts during a conference call.

That may be a phrase Apple’s management comes to rue, Lynx Equity analysts K.C. Rajkumar and Jahanara Nissar wrote. "Hardly a week later, U.S.-China relations were back in the thick of a trade dispute the Street had assumed was in the rear-view mirror," the analysts said.

Beyond China, Huawei’s problems could help Apple. Trump’s ban means future Huawei handsets sold outside China will have to run without Google’s Android operating system and crucial services like the Play app store.

Huawei customers vented on social media on Tuesday, worrying their gadgets might not work as well with less support from the U.S. internet giant. That could mean some customers buy an iPhone instead.

"These issues will reduce demand for Huawei over coming years and could give Apple an incrementally better position in the marketplace," said Ives.

There aren’t many customers in the U.S. for Apple to win back. But in other parts of the world, Huawei has become a thorn in Apple’s side. The Chinese tech giant had almost a quarter of the smartphone market in Europe in the fourth quarter, just behind Apple and Samsung Electronics Co., according to research firm Canalys. Globally, Huawei is the second-largest smartphone maker behind Samsung.

Beside Google, Huawei is also losing access to key components from U.S. chip makers including Qualcomm Inc. and Intel Corp. The loss of such a big customer may make these suppliers more willing to negotiate on price with Apple.

"It could give Apple a little bit more leverage in supplier agreement negotiations, but Apple won’t want to pressure them too much," said Cross.