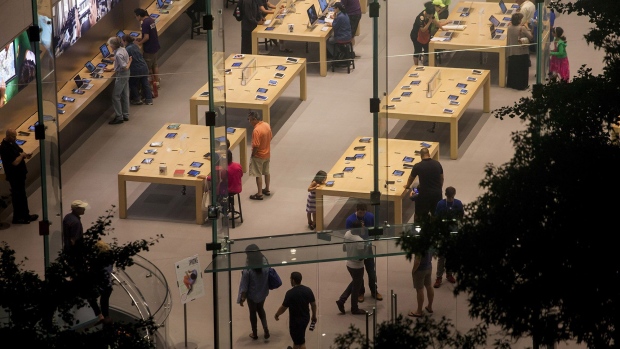 Apple, which has more than US$200 billion in cash and securities on its books, sold senior unsecured bonds in five parts. The longest portion of the offering, a US$1.5 billion 30-year security, will yield 1.03 percentage points above Treasuries, after an initially discussed spread of about 1.25 percentage points, according to a person with knowledge of the matter.

Read more: Why Apple’s Borrowing US$7 Billion Even With 30 Times That in Cash

Apple, along with peers Oracle Corp. and Microsoft Corp., has not tapped the bond market since new U.S. tax laws took effect at the beginning of last year, allowing companies to repatriate overseas earnings at a lower cost. It’s been using that source of cash to fund capital returns in the meantime, an activity it had typically relied on investors for. The company last sold bonds in November 2017, in a US$7 billion debt offering.

With a rally in Treasuries pushing the average investment-grade bond yield to just 2.79 per cent, companies are getting in while the getting is good. Disney hadn’t issued bonds in nearly a year until Tuesday, and Coca-Cola Co. is borrowed in dollars Wednesday for the first time since May 2017. Hewlett Packard Enterprise Co. also returned to the market after a yearlong absence.

Apple has been aiming for a net-cash-neutral position, but its cash still exceeds debt by around US$100 billion. In April, it increased its share repurchase program to US$175 billion from US$100 billion, of which US$78.2 billion had been used by the end of June. Proceeds from the bond sale could be used to buy back shares, as well as for acquisitions and debt repayment, among other uses.