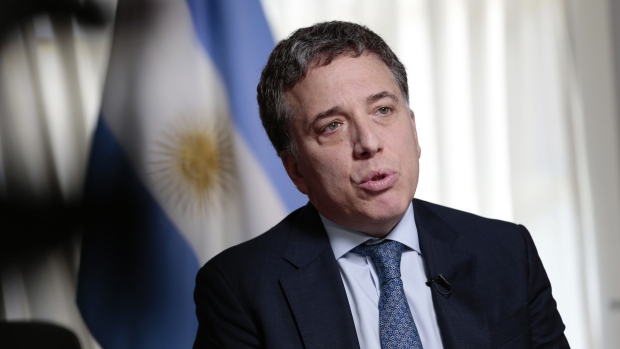 Nicolas Dujovne, Argentina's economy minister, speaks during an interview in Buenos Aires, Argentina, on Wednesday, Nov. 28, 2018. Dujovne said that Argentina will be in a stronger position to return to international debt markets in 2020 as investors see progress on inflation and debt reduction. , Bloomberg

“I am convinced that, given the circumstances, the government you lead needs a significant renewal in the economic area,” Dujovne wrote in a letter to the president. “It’s been an honor for me to serve in your government.”

Local news media reported that Hernan Lacunza, economic minister for the province of Buenos Aires, would replace Dujovne. Lacunza and his spokesperson weren’t immediately available to comment when contacted by Bloomberg.

To contact the editors responsible for this story: Juan Pablo Spinetto at jspinetto@bloomberg.net, Walter Brandimarte