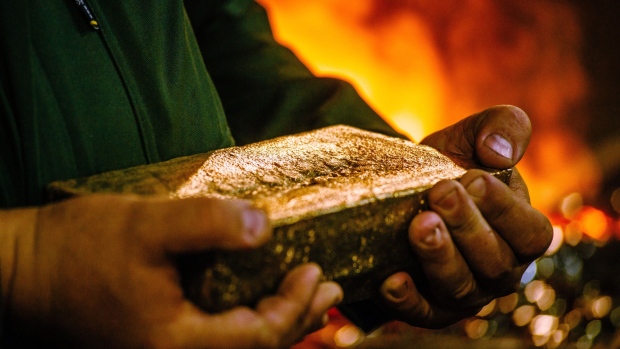 A worker carries a 28 kilogram gold bar after casting and cleaning in the foundry at the South Deep gold mine, operated by Gold Fields Ltd., in Westonaria, South Africa. Photographer: Waldo Swiegers/Bloomberg , Bloomberg

We're seeing another "zero-premium" takeover in the gold space, an industry whose investors are gun-shy when it comes to expensive mergers.

Argonaut Gold is buying Alio Gold by way of an approximately $60-million stock swap in which 0.67 of an Argonaut is exchanged for each Alio share. Argonaut and Alio shareholders will own about 76 per cent and 24 per cent of the merged company.

Zero-premium or "at-market"  acquisitions  are deals in which shareholders of the target are offered a price that isn't higher that the current level of the shares.  Argonaut and Alio say the exchange ratio was based on the 20-day trading price for Alio and Argonaut.

“Alio had been suffering from limited access to capital for some time," Green said in a note to clients Monday. He added Alio has had persistent operational problems at its Florida Canyon mine in Nevada, which was bought the company's previous management team.

But he added that "Alio's Ana Paula development project in Mexico (Argonaut's primary base of operations) holds good upside potential and is likely a key element of the transaction."

Argonaut, whose corporate office is Reno, Nev., lists the El Castillo mining operation in Durango, Mexico and the La Colorada mine in Sonora, Mexico, as its main assets.

The merger will create a company with production from four operations totalling more than 235,000 gold equivalent ounces per year.

Argonaut Gold noted that Florida Canyon mine, where Alio has had troubles, is "in close proximity" to its own headquarters.