U.S. stocks rallied for a second day as investors embraced the Federal Reserve’s bullish economic outlook while downplaying the risk of contagion from turmoil in Chinese debt markets. Yields jumped worldwide after the Bank of England moved closer to raising rates and the dollar weakened.

The S&P 500 registered its biggest two-day gain since July, jumping 2.2 per cent, with the Fed signaling on Wednesday that it’s on track to start scaling back asset purchases this year as the recovery takes hold. Yields climbed globally led by the U.K. market, where the 10-year gilt yield topped 0.90 per cent for the first time since May after the Bank of England opened the door to a 2021 rate increase to contain a surge in inflation. Treasury yields surged, led by the 30-year, which rose about 12 basis points in the biggest increase in more than a year.

“A hawkish Fed was surprisingly welcomed by equity markets as it was seen as a confirmation of continued strength and ‘substantial progress’ made by the economy in recovering from the COVID shock,” said Anu Gaggar, global investment strategist at Commonwealth Financial Network. “While we are far from the end of QE and near-zero rates, the tide seems to be beginning to change. So far, the market had welcomed bad news as good news, but a market reacting to signs of an economy able to stand on its own without the monetary policy crutches is a refreshing change.” 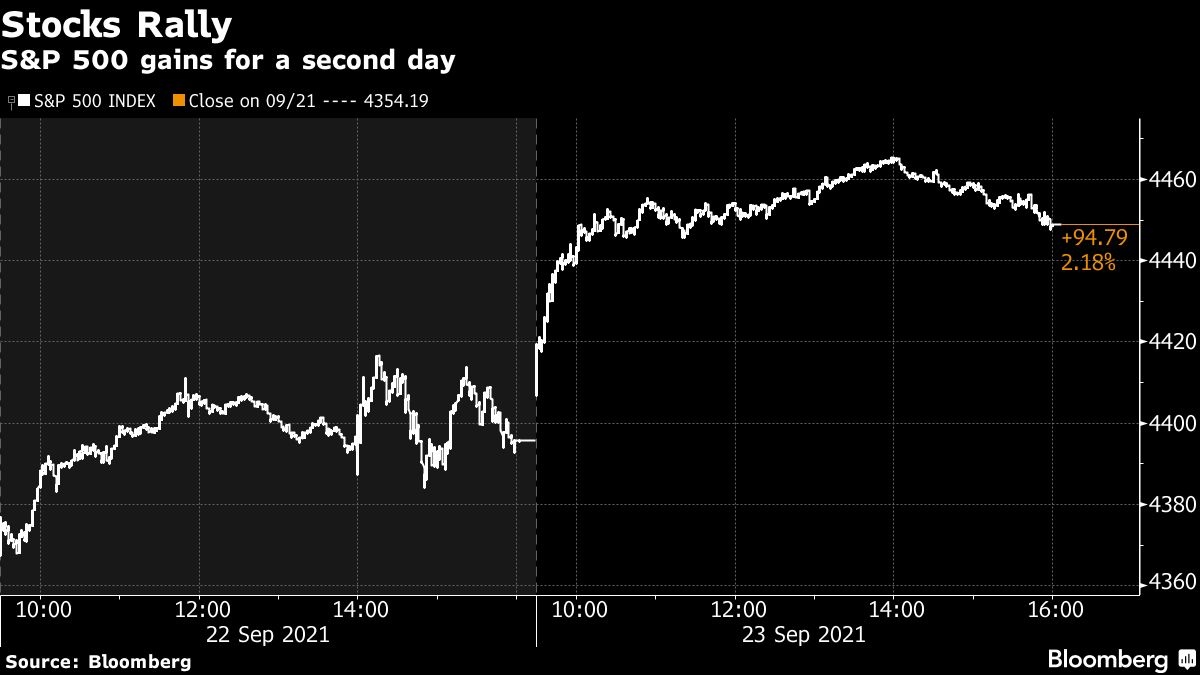 Even with Thursday’s jump in yields, confidence is building that markets can ride out a pullback in Fed stimulus, unlike 2013 when the so-called taper tantrum triggered large losses in bonds and equities. Investors are betting that the economic and profit recovery will be strong enough to outweigh a reduction in asset purchases, while ultra-low rates will continue to support riskier assets even as concerns linger about contagion from China’s real-estate woes.

“The turbo-charged taper -- a little bit of a surprise, it was coming in a relatively short period that they’re planning for this, but the markets are OK with that at the end of the day,” Paul Donovan, UBS’s global chief economist, said during a Bloomberg TV interview.

Meanwhile, the British pound rallied and gilts declined as traders brought forward wagers on a Bank of England rate hike to 0.25 per cent after officials said developments since its August meeting appear to have strengthened the case for modest tightening.

Stocks briefly pared gains during European market hours after a report that Chinese authorities signaled reluctance to bail out Evergrande, even as Beijing injected more cash into the financial system and regulators instructed the embattled property developer to avoid a near-term default.

Fears of an Evergrande failure have caused a sharp rise in borrowing costs for other junk-rated Chinese developers and cast doubt on the health of some smaller Chinese banks.

Elsewhere, emerging-market stocks climbed for a third day. Turkey’s lira slumped to record low against the dollar after the central bank unexpectedly cut interest rates. Oil gained and gold declined, while Bitcoin steadied around US$44,000.