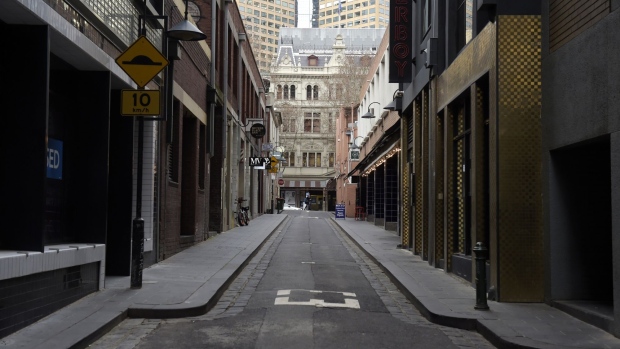 Crossley Lane is deserted in Melbourne, Australia, on Thursday, July 16, 2020. Victoria state last week enforced a six-week lockdown after health authorities identified breaches in hotel quarantine procedures as the catalyst for outbreaks. An additional 1,000 defense force personnel will be sent to Victoria over the next three to four weeks to free up the state’s emergency services workers and allow them to self-isolate if they’re exposed to the coronavirus. Photographer: Carla Gottgens/Bloomberg , Bloomberg

(Bloomberg) -- Australia slipped into deflation in the three months through June, reflecting a combination of cheap oil and government intervention to pause some service charges in order to nurse households through the Covid-19 lockdown.

The consumer price index fell 1.9% from the first quarter, compared with economists estimates of a 2% drop, the biggest decline in 72 years, data from the Australian Bureau of Statistics showed Wednesday. Annual CPI fell 0.3%. The trimmed-mean gauge, a key core measure, declined a quarterly 0.1% for an annual increase of 1.2%, compared with forecast gains of 0.1% and 1.4%, respectively.

The data span the shuttering of large swathes of Australia’s economy that prompted the government to introduce free child care and caps on administered prices to help Australians through the crisis. An earlier geopolitical struggle that led to a plunge in oil prices was compounded by a collapse in demand during the lockdown in large parts of the developed world.

The inflation report showed tradables prices, which are typically impacted by the currency and global factors, fell 1.3% in the second quarter from the previous three months. Non-tradables, which are largely affected by domestic variables like utilities and typically contribute to underlying inflation, dropped 2.3%.

The Australian dollar edged down following the release, and traded at 71.59 U.S. cents at 11:45 a.m. in Sydney. It soared almost 13% in the second quarter, retracing almost all of its losses in the first three months of the year that reached a nadir in March during the peak of virus-induced market turmoil.

The weighted median gauge, another core inflation measure, rose 0.1% in the quarter for an annual increase of 1.3%. Economists had predicted 0.1% and 1.4% increases, respectively.

The Reserve Bank of Australia, which targets inflation of 2%-3% over time, has focused its attention this year on combating the fallout from the pandemic, which has tipped the economy into its first recession since 1991. In March, it cut the cash rate to the effective lower bound, set a target of 0.25% for the three-year government bond yield and injected liquidity into the financial system.

In the central bank’s May quarterly update, it forecast a 1% drop in headline inflation for the 12 months through June. It expects inflation to gain momentum in subsequent quarters along with the economy’s recovery.