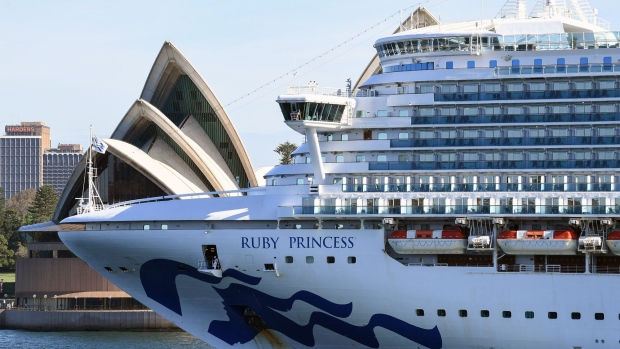 SYDNEY, AUSTRALIA - MARCH 19: Ruby Princess belonging to cruise ship company Princess Cruises, departs Sydney Harbour with no passengers and only crew on board as it passes the Opera House sails on March 19, 2020 in Sydney, Australia. Non-essential gatherings of 100 or more people indoors are banned, along with outdoor gatherings of more than 500 people while the government has declared a human biosecurity emergency. There are now 596 confirmed cases of COVID-19 In Australia, while there have been six confirmed deaths, five in NSW and one in Western Australia. (Photo by James D. Morgan/Getty Images) , Photographer: James D. Morgan/Getty Images AsiaPac

An inquiry into why hundreds of passengers were allowed to disembark a coronavirus-stricken cruise ship berthed in Sydney earlier this year has blasted Australian health authorities for failing to conduct tests and isolate the infected.

At the time, the Ruby Princess was the single biggest vector of infection in Australia, linked to hundreds of cases and 28 deaths.

After docking in Sydney on March 19, some 2,647 passengers were allowed to disembark, even as dozens of people on board suffered flu-like symptoms. With the first infections confirmed the next day, state and federal authorities blamed each other for the lapse, and health authorities raced to track down passengers who had dispersed across Australia and boarded overseas flights.

A special commission of inquiry, appointed by the New South Wales state government, handed down its findings on Friday. The 320-page report is a catalogue of errors, including allowing disembarked passengers to travel interstate instead of making them isolate for 14 days.

An expert panel formed by the New South Wales health department should have noticed a spike in the number of passengers with acute respiratory illness or flu-like symptoms, and its decision to classify the ship as “low risk” was “as inexplicable as it is unjustifiable,” the inquiry found.

State Premier Gladys Berejiklian, who was given the report Friday, said she released it immediately in the “interests of transparency” and would respond early next week.

The decision to allow passengers to disembark was made despite growing global concern about virus cases on cruise ships. The infection of more than 700 people on the Diamond Princess, also operated by Princess Cruises, showed how quickly the virus could spread while it was berthed off Japan in February.

The Ruby Princess was linked to an outbreak in Australia’s island state of Tasmania that led to the closure of a major hospital, and 8 fatalities in the U.S. Of the 1,682 Australian passengers on board, 663 contracted Covid-19, as well as 191 crew members. The inquiry said the total number of people infected may never be known because about one-third of passengers were international guests who returned overseas.

The inquiry heard testimony from Princess Cruises employees and executives, health officials and infected passengers. A separate criminal probe is underway, though no charges have been laid.

Commissioner Bret Walker outlined multiple failings and a lack of communication between government departments during what he termed a “sorry episode.”

NSW Health and the cruise ship operator should have ensured that vessels were aware of a new definition of what constituted a suspect case of Covid-19. By the time the ship docked, 120 people fell into that category and should have been isolated in cabins.

The delay in obtaining test results from swabs taken of a limited number of passengers on the morning of March 19 was “inexcusable.”

The inquiry called for better communication between federal and state health departments, biosecurity officials and other departments and stronger protocols around allowing passengers to disembark.