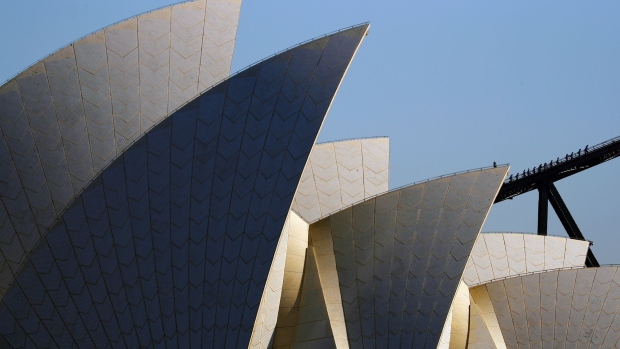 People walk across the Sydney Harbour Bridge as the Sydney Opera House stands in Sydney, Australia, on Wednesday, May 15, 2019. Australia's economy has been weighed down by a retrenchment in household spending as property prices slump and slash personal wealth. An election Saturday is likely to see the opposition Labor party win power and lift spending further. , Bloomberg

One of the world’s fastest-growing markets for exchange-traded funds has hit a speed bump as Australia’s regulator tries to tackle concerns around transparency and conflicts of interest.

The Australian Securities & Investments Commission in July asked exchanges to stop admitting managed funds that don’t disclose their portfolios daily and have internal market makers. With the review not scheduled to be completed until the end of the year, funds are either sitting on the sidelines awaiting clarity or retooling their offerings.

“In short, the ASIC review is having an impact on active ETF growth,” said Camilla Love, managing director of eInvest, a provider of active ETFs. Work on two equity funds in the pipeline has been halted until ASIC completes its review and there’s more certainty about the operational outlook, Love said.

Assets in Australian ETFs and related products surged 41 per cent to almost AUS$60 billion (US$41 billion) in the 12 months to October, according to data from the Australian Securities Exchange. Though a fraction of the US$4 trillion market in the U.S., they are projected to grow rapidly. Funds in ETFs will reach more than AUS$100 billion by 2022 and AUS$600 billion by 2030, estimates financial services data provider Rainmaker.

While passive funds that track a benchmark dominate the Australian market, it’s active ETFs -- a small but fast-growing segment-- that has caught the eye of the regulator.

Because there’s no requirement to disclose their holdings daily, some active managers in Australia have preferred not to publish that information to protect their intellectual property and prevent competitors from copying their portfolios.

In such instances, external market makers have been reluctant to take on the risk of quoting bids and offers, and that’s seen the fund manager double up as the market maker. ASIC says that arrangement is fraught with potential conflicts of interest, because only the fund manager has timely information about the value of the fund’s underlying holdings.

“We have concerns that the profit generated from internal market making is not well understood by investors and may lead to inherent conflicts and unequal treatment among different groups of investors,” ASIC said in an earlier review in 2018. It cited the possibility of “an unfavorably low bid price” being set for a member seeking to sell units in the fund.

The regulator plans to complete its latest review by the end of the year and hasn’t yet decided its next step, according to a spokesman.

Transparency rules vary from country to country. In the U.S., almost all ETFs -- passive and active -- must disclose their holdings daily. However, the securities regulator has recently approved a new type of active ETF that will disclose quarterly in line with mutual-fund requirements. They will still have external market makers, who will use an indicative value of the portfolio to make a price.

While active ETFs make up only a fraction of the Australian landscape, they have been gaining in popularity as the nation’s AUS$2.9 trillion pool of retirement savings seeks higher returns. Funds under management in active and smart-beta ETFs -- those that use factor-based investment strategies -- surged 59 per cent in the 12 months to September to AUS$8.1 billion, compared with a 29 per cent gain for indexed ETFs, according to Rainmaker.

Chris Meyer, head of listed products at Pinnacle Investment Management Group Ltd. in Sydney, said that if the regulatory review dragged on it would impact the firm’s ability to come up with new active ETFs. Meyer estimated there were as many as 12 active ETFs in the pipeline waiting to list. Pinnacle has three active ETFs already listed.

ASIC confirmed there are active ETFs waiting to list, but declined to provide an estimate.

The regulator’s decision to put on ice the approval of new active ETFs has prompted some providers to rethink their offerings.

EInvest’s Love said three active fixed-income ETFs the firm has put together with Daintree Capital, that were going to use the internal market making model, are now going to use an external market maker with a delay in the disclosure of their composition. One of the funds debuted on the Chi-X exchange on Tuesday.

For the other two, eInvest has worked with the regulator, Chi-X and peers to put in place “a limited disclosure regime,” Love said. That means there is daily disclosure of a pricing basket to the market, but the portfolio isn’t disclosed daily in full to the market to protect intellectual property, she said.

“We are supportive of the review to provide clarity and consistency to the internal market making processes for the industry,” she said.

Some active ETF providers already choose to publish more information about their holdings.

Fidante Partners offers two active ETFs on its ActiveX platform and discloses the portfolios every day to the broader market as well as market makers so everyone has the same information at the same time.

“They are fixed-income offerings and the portfolio managers are not concerned about replication and front-running due to the complexity of the portfolios and OTC nature of the underlying asset classes,” said Samuel Morris, a Sydney-based investment specialist at the AUS$60 billion asset manager.

Deutsche Bank AG, which is in the process of transferring its prime brokerage operations to BNP Paribas SA, and closely held Susquehanna International Group are the dominant external market makers for ETFs in Australia.

“We didn’t get involved in Australia in active ETFs because at the time we didn’t feel comfortable with the regulatory framework around the market-making model,” Obrist told a briefing in Sydney, adding he welcomed the ASIC review as the Australian market expands and matures.