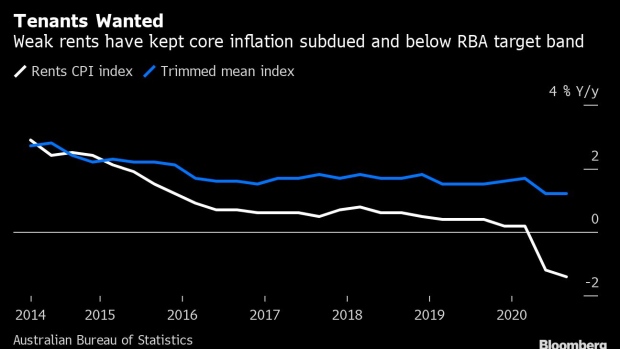 A woman and child look at a window display of the David Jones Ltd. department store in Sydney, Australia, on Monday, Dec. 7, 2020. Australia's recovery is poised to accelerate as cashed up households -- joined by Victorians released from Covid-19 lockdown -- fuel a spending boom, after the economy exited its first recession in three decades. Photographer: Lisa Maree Williams/Bloomberg , Bloomberg

(Bloomberg) -- Australia’s consumer price index will be lifted by a jump in childcare costs, with cross-currents in other items ranging from falling rents to increasing costs for dining out.

The rise in childcare will add approximately 0.3 percentage points to headline CPI in the final three months of 2020, the Australian Bureau of Statistics said Thursday. The data are due out Jan. 27.

“The December quarter will see the Childcare series return to the pre-Covid-19 level, following a significant increase in the September quarter,” the ABS said. “The September quarter included free child care for eight days at the start of July and low attendance levels in Melbourne during stage 4 restrictions.” The subsequent increase reflects fees being charged for the entire quarter and higher attendance levels in Melbourne, it said.

Australian policy makers have struggled to return inflation to the central bank’s 2-3% target as wage growth remained subdued. Meantime, rents have dropped as people in inner city areas fled to further out.

Against that, cashed up households have spent heavily on home improvements and restaurants, while cafes have lifted their prices to compensate for restricted patron numbers.

The ABS noted that government measures to help households during the recovery directly impact CPI. It cited the A$25,000 ($19,400) HomeBuilder grant, and similar A$20,000 grants introduced by the Western Australian and Tasmanian state governments to support residential construction.

“These grants to consumers for new home builds and large renovations has a downward impact on the new dwelling purchase by owner-occupiers series in the CPI,” the bureau said.

The Reserve Bank of Australia, which cut its key interest rate to 0.10% in November, says it doesn’t intend to tighten borrowing costs until inflation is sustainably within the target. That’s likely to require strong wage growth stemming from a tight labor market, outcomes unlikely to be in the offing any time soon given the jobless rate is at 6.8%.

Its efforts to stoke inflation are made even more challenging as a rolling 12.5% increase in tobacco taxes over the past four years has now concluded. This was previously adding around 0.4 percentage points to headline inflation each year.

Employment data are due Jan. 21 and the RBA holds its first meeting of the year on Feb. 2.