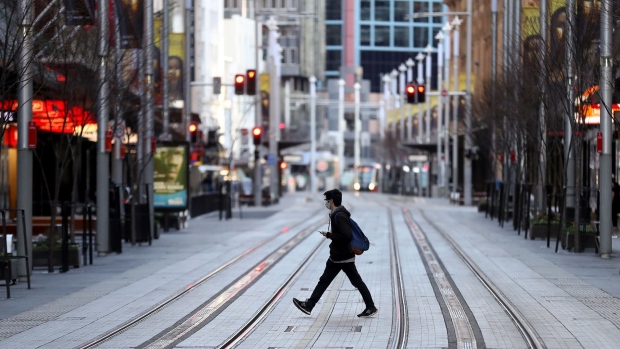 A deserted street in the central business district of Sydney, Australia, on Tuesday, July 27, 2021. Sydney's month-long lockdown shows no signs of being eased as the city's daily Covid-19 cases keep climbing, even as other Australian cities move to open back up after bringing their clusters under control. , Bloomberg

(Bloomberg) -- Australia’s government has said the country will begin reopening and avoid snap lockdowns once 70% of the entire adult population has been fully vaccinated.

The country will move from the current suppression phase of controlling the virus to the next “when Australia reaches 70% of the eligible population who are double-dose vaccinated,” Prime Minister Scott Morrison said at a media briefing Friday. That will mean easing restrictions on vaccinated residents, with lockdowns to be implemented only in extreme circumstances and the number of inbound passengers returning to levels seen earlier this year.

When the nation reaches an 80% vaccination rate, increased travel to and from the nation will be allowed. Still, Morrison said it was too difficult to predict a time when Australia will fully reopen to all travel.

Morrison was speaking after a meeting of the National Cabinet, comprised of the prime minister and the eight state and territory leaders, to discuss the nation’s exit strategy from its so-called Covid Zero strategy, which has closed the borders since early last year.

Plans to reopen have been hampered by Australia’s tardy vaccine roll-out, which has been slow in comparison to other developed nations such as the U.S. and U.K., with only enough doses to cover 23% of the population administered. Morrison has said all eligible Australians should be offered the jab by the end of the year.

The announcement comes after Sydney’s delta-outbreak cases forced Australia’s largest city into a lockdown that will be implemented for at least nine weeks, after this week being extended for a third time until August 28. The city has since mandated mask-wearing in public for the city’s worst-hit areas and increased penalties for rule breaches, while thousands of additional police officers and the military are being tasked with ensuring compliance.

Sydney’s lockdown has prompted some analysts from Australia’s biggest banks to forecast a contraction of the nation’s economy in the third quarter, as Morrison’s conservative government is spending about A$750 million ($550 million) a week on support for businesses and workers in New South Wales state.