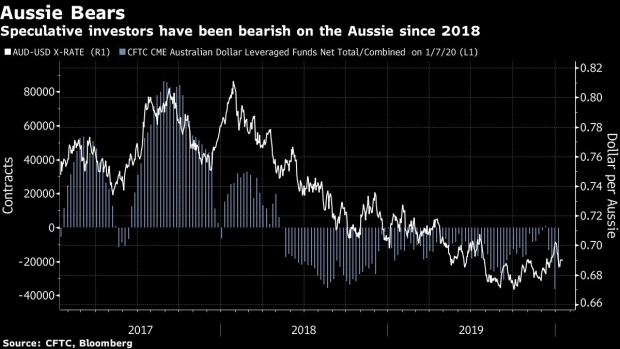 An Australian fifty dollar banknote is arranged for a photograph in Sydney, Australia, on Wednesday, May 23, 2018. Australia's central bank chief Philip Lowe said last week that his nation and China together can be a force supportive of an open global trading system. Photographer: Brendon Thorne/Bloomberg , Bloomberg

(Bloomberg) -- Australia has some big decisions to make about its future. For insight into the stories that matter, sign up for our new weekly newsletter.

In the two years since the U.S.-China trade war erupted, Australia’s dollar has weakened around 10%. It may drop even further when the dispute is resolved.

The Aussie could slide more than 5% to 65 U.S. cents this year, according to QIC Ltd. and Capital Economics. If Beijing buys more American goods at the expense of Australian products as part of an accord, that’s another negative for a currency that’s under pressure from slowing economic growth and the prospect of further policy easing.

“Import substitution can definitely be one driver of the Aussie lower,” said Stuart Simmons, senior portfolio manager at QIC in Brisbane. “Whether it’s liquefied natural gas or tourism or education, we might only get a sense of it in 12 months how this will shape up if China substitutes Australia for U.S. imports.”

The Aussie has dropped 1.8% against the dollar so far this year, adding to two years of declines as the trade war hurt the outlook for the nation’s exports. The currency slumped to the lowest in a decade in October before recovering some ground after the U.S. and China agreed on a phase-one deal.

The agreement to be signed Wednesday may bind China to the purchase of $200 billion of U.S. goods over two years, according to a South China Morning Post report citing people briefed on the matter. Such a deal may validate an earlier warning from the Reserve Bank of Australia that the nation could be on the losing end once a trade accord is reached.

Australia was China’s largest supplier of liquefied natural gas in 2019, providing nearly half of the imports, while deliveries of American cargoes nearly disappeared, according to ship-tracking data compiled by Bloomberg.

To be sure, replacing Aussie imports with American products may take months to play out, with producers on both sides tied into long-term contracts. China is also the biggest source of tertiary students in Australia’s international education sector.

“The main area that we would be concerned about will be LNG,” said Ben Udy, economist at Capital Economics in Singapore. “That’s been a source of growth for Australian exports recently and is a sector that the U.S. produces quite a lot of -- replacing Australia, if it happens, will add some pressure on the Aussie.”

--With assistance from James Thornhill and Stephen Stapczynski.

To contact the editors responsible for this story: Tan Hwee Ann at hatan@bloomberg.net, Liau Y-Sing