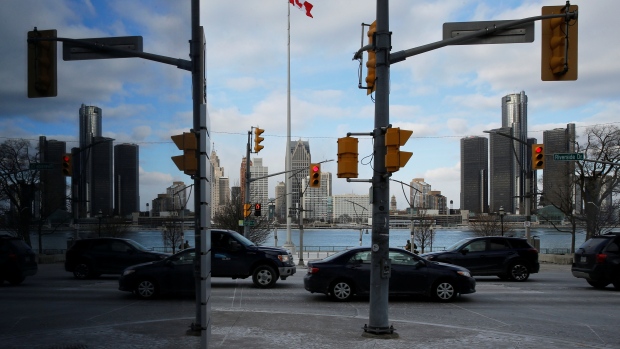 A general view of the Detroit skyline is seen from Windsor, Onatario, Canada

Global automakers on Monday urged the Trump administration not to terminate the North American Free Trade Agreement and expressed hope the United States, Canada and Mexico can successfully conclude a modernized and improved trade pact.

Trump has threatened to withdraw from NAFTA, which is heavily utilized by automakers that have production and supply chains spread across the three countries.

Marchionne, speaking at a news conference at the Detroit auto show, said FCA's truck production shift in part "goes a long way I think in addressing some of President Trump's concerns about the dislocation of production capacity out of the United States."

That decision reduces the risk those trucks would be hit with a 25 per cent tariff if NAFTA unravels.

"We've got a big commitment to our country and it's proven in the numbers," he said.

Unlike General Motors Co and FCA, Ford does not build trucks in Mexico.

Michigan Governor Rick Snyder, a Republican, met with Vice President Mike Pence in December, urging the administration to improve NAFTA instead of terminating it, which could harm the auto industry.

"That would be a negative for all three countries," Snyder told reporters after touring the auto show.

"No matter what the new NAFTA rules, we will adjust very fast so we can maximize our business," he said. "The more localized you are the less exposed you are to potential changes."

Under NAFTA, at least 62.5 per cent of the material in a car or light truck made in the region must be from North America to be able to enter the marketplace tariff-free.

The Trump administration has proposed increasing that minimum NAFTA content to 85 per cent, with 50 per cent made in the United States.

"There's not a vehicle that meets that,” he said.

Lentz said since NAFTA was agreed 14 auto plants have been built in the United States – eight by Toyota – and 11 in Mexico.

"It's not like we are not investing in the United States," Lentz said.

Marchionne also said the 85 per cent figure is not feasible. "I’m hopeful that we'll see a more rational number going forward and if it is more rational, then I think we’ll be able meet the standard," he said.

The U.S. auto industry has worked to convince the Trump administration of NAFTA's importance. In October, major automakers, suppliers and auto dealers launched a coalition to back the agreement.