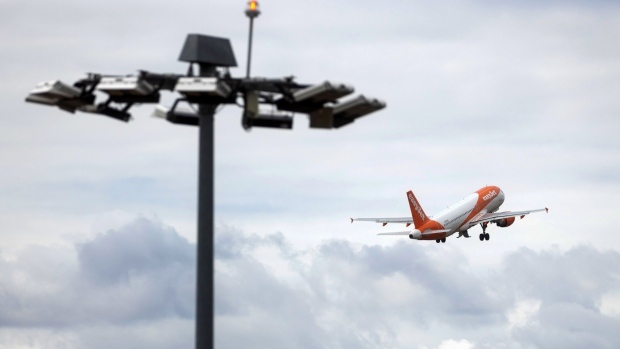 A passenger aircraft, operated by EasyJet Plc, taking off at London Luton Airport in Luton, U.K., on Monday, July 25, 2022. EasyJet are due to report their latest earnings on Tuesday. Photographer: Chris Ratcliffe/Bloomberg , Bloomberg

(Bloomberg) -- Europeans have still got the travel bug — even more so if they can fly at a discount. EasyJet’s upbeat comments on bookings this morning underscore that airlines’ comeback is set to continue. Pubgoers, on the other hand, are slightly less enthusiastic, with Wetherspoon warning that costs for pretty much everything in the hospitality industry are still “far higher” than before the pandemic.

Here’s the key business news from London this morning:

EasyJet Plc: Europe’s second-largest discount carrier said strong bookings continued into the second quarter and the crucial summer months and expects to beat the current market profit expectations for the full year, which now put pretax profit at £126 million for the period.

J D Wetherspoon Plc: The pub chain’s like-for-like sales in the last 12 weeks were 17.8% higher a year ago, but still 2% lower than in the pre-pandemic period.

Britain’s poorer regions are falling further behind in a blow to Rishi Sunak’s “levelling up” pledge, Bloomberg UK’s Scorecard shows.

The Bank of England has agreed a 3.5% pay rise for its 4,200 staff and a one-off 1% salary top-up this year under a sub-inflation deal that has been accepted by the union.

Meanwhile, financial regulators would face more scrutiny over their policies for consumers and the economy from Parliament under proposals from members of the House of Lords.

Barclays Plc is appointing Taylor Wright and Credit Suisse Group AG veteran Cathal Deasy as its new investment banking chiefs in a major reshuffle of its top dealmaking ranks. Barclays notched record investment banking fees in 2021 and has been seeking to grab share from rivals after rejecting an activist shareholder’s push to shrink the Wall Street division.

BlackRock Inc. is experimenting with a program that would give a larger number of end investors voting power at shareholder meetings. To gauge interest and see how the new approach would work in practice, the world’s biggest asset manager has reached out to wealth firms in the UK in recent weeks about piloting the program, people familiar with the matter told Bloomberg.

Wizz Air Holdings Plc will report its third-quarter update tomorrow. The Budapest-based airline faces many of the same consumer dynamics as EasyJet, yet many of its routes are under-utilized, according to Bloomberg Intelligence. The company has halted some operations in Romania due to limited profitability and has opened a base at Suceava airport to capitalise on rival Blue Air Aviation SA’s struggles. Family visits around the festive period may have given an added boost.

Investors should also keep in mind Wizz Air’s “strategically important” Middle East expansion, which connects places like Romania and Hungary to Saudi Arabia. Estimates compiled by Bloomberg indicate the company will make more progress towards cutting its adjusted diluted EPS losses this year, although it may take until next year to return to profitability.

For a more considered take on the UK's economic and financial news, sign up to Money Distilled with John Stepek.